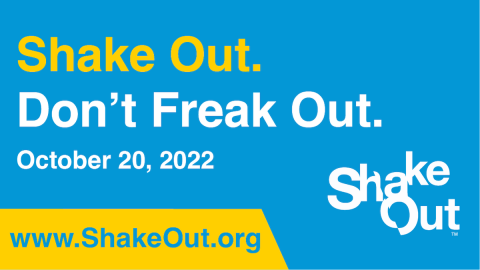 Dr. Andrew Rindsberg, a professor of geology and paleontology at the University of West Alabama, needs no reminder of the last time the earth wobbled with severity in Alabama.

Nineteen years ago, before dawn on April 29, 2003, a 4.9 magnitude earthquake struck near Fort Payne, the DeKalb County seat not far from the Georgia state line. The shaking, which was felt in 11 states, caused sinkholes and mudslides near Fort Payne and broke windows, damaged chimneys and cracked masonry in northeast Alabama. Scientists at the Geological Survey of Alabama (GSA) say only a 1916 earthquake near Irondale in northern Shelby County was larger in recorded state history.

UWA’s campus in Livingston doesn’t sit on a fault line separating the planet’s tectonic plates, Rindsberg said. But minor earthquakes are common in Alabama’s Black Belt region, including in Sumter County, which is one reason the university is enrolled in the nationwide Great ShakeOut Earthquake Drills program on Oct. 20.

At 10:20 a.m. on that day, participants are asked to practice proper earthquake safety that centers on the drop-cover-hold method emergency management officials believe is the best approach. For roughly one minute, participants are asked to get on their hands and knees, shelter underneath a desk or table if possible (if not, then crouch next to an interior wall), use their hands to cover their head and steady themselves until the imagined shaking stops.

As director of campus safety and security at UWA, Police Chief Josette White said the concept of the Great ShakeOut hinges on awareness and preparedness, regardless of the frequency of earthquakes in the Black Belt.

“We would like to encourage individuals to think about earthquakes and the damages they can cause,” White said. “Although this region is not known for having many earthquakes, individuals may vacation in areas where they are earthquakes.”

In addition to his expertise in geology, Rindsberg understands what it’s like to live in a region more frequently associated with seismic activity -- the San Francisco Bay area, where he resided for five years. He admits that Alabama doesn’t share that region’s concerns. “Alabama is in one of the most earthquake-free zones in the world, but every few hundred years, we have a doozy,” he said. “And an earthquake, even a strong earthquake, can hit anywhere.”

“Oh, yeah, we have earthquakes in Alabama,” Rindsberg said.

Alabamians in and around Livingston may be accustomed to nature’s dangers, especially tornadoes and Gulf Coast hurricanes, but they should avoid a false sense of security about earthquakes, he said, and here’s why: “We're close to where a plate boundary used to be, and there's always residual activity.” That the 2003 Fort Payne earthquake was felt well west of Birmingham is proof, he said. Likewise, Sumter County is close enough to the New Madrid Seismic Zone in northeastern Arkansas, southwestern Kentucky, southeastern Missouri, and northwestern Tennessee. That zone is one of the the most seismically active areas east of the Rocky Mountains, according to the U.S. Geological Survey. “If that zone unleashed another 8-pointer,” Rindsberg said, “we would feel it throughout the state.”

The UWA geologist agrees with Chief White that students, faculty and staff should take advantage of the Great ShakeOut’s safety campaign and practice the drop-cover-hold on tactics. Unlike tornadoes and hurricanes -- storms that often provide warning of their arrival -- earthquakes are stealthy. Escaping to a safe place outside is rarely possible, Rindsberg said.

“The greatest concern is something falling on you,” he said. “Some in Hollywood will teach people to be afraid of cracks opening in the earth. Forget that; that's Hollywood. It doesn't happen even in the woods. Trees are not likely to fall down any more than they are in the storm.”