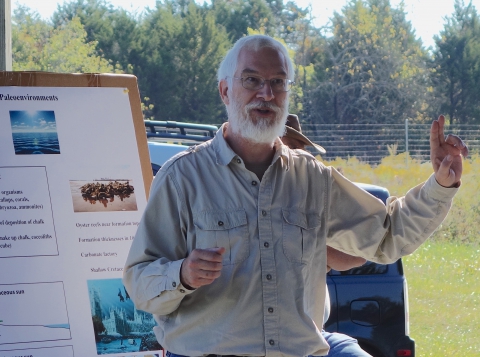 Dr. Andrew Rindsberg is a professor of geology and paleontology at UWA.

Since 1991, the International Ichnofabric Workshop -- a scientific conference related to the field of ichnology -- has been held semi-annually across the globe, from Taipei to the Czech Republic, from Spain to Turkey. Livingston, Alabama, now belongs on that list.

The University of West Alabama in November hosted the series’ 16th gathering of scientists and scholars interested in the study of fossilized tracks, burrows and trails made by animals and other living organisms.

Dr. Andrew Rindsberg, a professor of environmental geology and paleontology at UWA, would have preferred for workshop attendees to spend time on the Livingston campus. But despite holding the sessions virtually because of Covid-19 concerns, Rindsberg considers the event an unmitigated success.

“Absolutely,” said Rindsberg, who co-organized the event along with Dr. David Kopaska-Merkel, who recently retired from the Geological Survey of Alabama. “I was on tenterhooks because everybody is so fatigued with Zoom and all. But there also was a distinct attitude of relief that it worked and it was actually enjoyable.”

In non-pandemic years, field trips related to the study of trace fossils are popular parts of the workshop’s schedule, Rindsberg said. In-person field trips weren’t possible this fall, so he and Kopaska-Merkel broke the workshop into halves -- the virtual sessions this year, the field trips to Alabama sites in 2023.

“I was on tenterhooks because everybody is so fatigued with Zoom and all. But there also was a distinct attitude of relief that it worked and it was actually enjoyable.”

A root cause of Rindsberg’s trepidations over attendance was the field trips’ popularity among established scientists and university faculty who normally attend the workshops. In response, organizers marketed the virtual sessions to a different demographic.

“Some people do need to update their resumes by giving talks and they have something to show as an accomplishment to their departments,” he said. “We pitched it to that, and we particularly pitched it to young grad students and faculty members because they are the people who needed this boost to their curriculum vitae more than anyone else. And that worked to some degree.”

Because the workshop hadn’t been held in the United States since the early 1990s, Rindsberg -- who has taught in Livingston since 2006 -- agreed that UWA’s participation is more significant than merely hosting a scientific event.

“We could have gone on being primarily just a teaching institution,” he said. “Right now, we’re trying to be a hybrid, teaching and research … We have a larger role to play than we have traditionally done.”