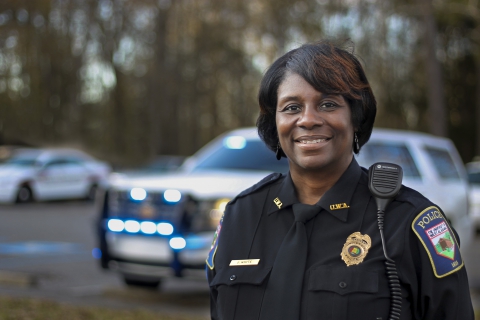 Livingston native's passion for policing is evident on campus

The moment isn’t lost on Josette White. Not in the least. Strangers aren’t greeted with bouts of hyperbole when they meet the University of West Alabama’s police chief. They instead sense hints of calmness and professional sincerity.

But White understands. The moment matters.

“Every day when I wake up, I think about it and it's still unbelievable,” she said. “I mention myself and I say, ‘Oh, I'm the chief.’ I'm grateful, I have to be honest. I thank God for it, sure.”

When UWA President Dr. Ken Tucker announced Jan. 6 that White had been promoted to police chief and director of campus safety and security, the news symbolized feel-good vibes that can unite a university community. White, who replaced retired Chief Jeff Manuel, is a Livingston native, a 2006 UWA graduate and a long-time member of the university’s police department.

But White agrees that her story offers nuance rather than simplicity. As one of the few African-Americans to lead a university police department in Alabama -- and one of only two African-American woman -- White is both a home-grown success story and a trendsetter in a profession historically dominated by men, especially in positions of leadership.

“That is groundbreaking to me,” she said. “I am excited. It's exciting. And there are a lot of things that I want to do here on campus.

As passionate as White is today about policing, the profession wasn’t her childhood dream. She briefly considered majoring in biology, but didn’t. After marrying in 1988, her husband’s enthusiasm for television police shows drew her in. On the screen, it looked interesting. “But other than that, I never thought about it,” she said.

But she did need a paycheck, and in 1994 she applied for -- and landed -- a job at the Livingston Police Department as a part-time dispatcher. That part-time role became a full-time position and led to her entering the police academy at the University of Alabama in 1996. (“I paid my own way through the academy,” she said. “I wanted it just that bad, I really did.”) In 13 years as an officer in Livingston she rose through the ranks, reaching sergeant, before accepting a position as chief juvenile probation officer in Tuscaloosa and Sumter counties.

Her state certification never lapsed. Neither did her interest in policing. Given a chance to return to Livingston and join UWA’s police department, she readily agreed.

At UWA, White has worked as an officer and in a variety of administrative roles, including overseeing the university’s compliance with the Clery Act, the federal statute that requires universities to report campus crime statistics. Prior to becoming chief, White said she “stayed in the office all day, every day. I didn't get out in patrol. I was even in here dispatching because we've been shorthanded.” But leading the department is nonetheless a significant change.

UWA’s police department currently has seven officers, two security officers and four dispatchers, including two part-timers, and shares a collegial working relationship with the Livingston Police Department. Since her promotion, White has responded to calls with officers, she said, and has stood back “and let them handle it -- but if I need to step up and say something, I will. I still can get out. I still can patrol. It's just in a different role.”

Security at a regional university in Alabama’s rural Black Belt brings a specific set of challenges, she said, though football Saturdays in the fall bloat the campus with visitors and alumni. During the week it’s common for officers to respond to calls to help students with locked cars or dead car batteries. Helping students, regardless of their need, is paramount, she said. “Every now and then,” White said, “we’ll get something else different.” UWA’s campus is consistently ranked among the safest in Alabama.

Policing, whether on university campuses or large cities, is a demanding profession that has come under intense national scrutiny in recent years. White understands that, as well. But she’s nonetheless bullish on policing and what it takes to be an officer.

“If it's not a passion for you, you will not stay in it long or either you'll start looking at it as just a job,” she said. “And to me, it's not just a job.

“I've listened to police officers throughout the years complaining about different stuff. They complain about the work. They complain about the pay. They just complain. But I don't ever remember complaining because it's a passion for me. The pay didn't matter because I feel like this is my calling. I enjoy getting up, coming to work every morning. I just do. So you need to be dedicated.”