At UWA, Payne's resilience is having an impact 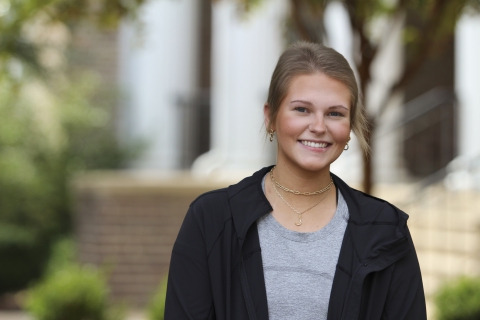 Her first school closed. Then doctors diagnosed her with Hodgkin's lymphoma. But the sophomore is excelling as an online student.

There’s an unexpected comfort in Julie Payne’s voice, a soothing quality amid a slight Southern rhythm that belies her age. If you weren’t aware that providence had so recently jumbled her life, you’d believe her first semester at the University of West Alabama has been nothing short of exquisite.

She loves UWA. She speaks of it in dulcet tones, as if she’s adored the university from birth, though that’s not true.

“This place is a hidden treasure,” she said. “I didn’t know it was this nice here.”

Payne’s voice raises, her eyes focus. She’s sincere. But what is true is that this 19-year UWA sophomore from Bibb County longs for full immersion in Livingston’s campus experience: meals at the Caf, a dorm in Hoover Apartments, Saturdays at Tiger Stadium.

Kismet, though, is multidimensional. It offers fortuitousness and disappointment. It also can be unrelenting, as Payne learned this spring when finishing her second semester at Judson College in Marion, Alabama.

Doctors diagnosed her with stage 4 Hodgkin’s lymphoma, a cancer of the lymphatic and immune systems. And Judson’s finances became so strained that the historic 183-year-old school would soon close.

So the president of Judson’s freshman class who fell in love with Livingston spent her first semester this fall at UWA as an online student in Bibb County, taking classes in public speaking, American literature, American history and art. Her bloated schedule of chemotherapy treatments -- starting May 13, ending Oct. 14, two rounds a month for six months -- took precedence over living in Hoover Apartments.

“I had so many complications,” Payne said, “if something happens again and I have to be admitted (to the hospital), I don’t want to miss school, I just needed to be online.”

Additional treatments may restrict Payne to online courses in the spring semester, too.

“Of course, being 19 she wants to be here; I want her to be here,” said her mother, Terri Payne. “When she moved into her dorm (at Judson) as a freshman, I wanted to grab ahold of her leg and say, ‘Don’t go, don’t go.’

Beyond the details of her last few months, the soul of Payne’s story revolves around her resilience and the relationship she has forged with UWA administrators and faculty. Hers is not a myopic story of an ailing sophomore. It is a tale that unveils a student’s willpower and a regional university’s willingness to help her navigate an arduous path.

“If there ever was a spokesperson for what this school is, I’ve just watched multiple departments come together when they found out what was going on.”

The search for a diagnosis

In Centreville, Bibb County High School sits just off the western edge of the Cahaba River that flows nearly 200 miles through Alabama’s heartland. It’s there where Payne played alto sax in the school band and served as a majorette for the purple-and-gold-clad Choctaws. She dreamed of becoming a ninth-grade biology teacher, an inspiration drawn from her senior-year AP biology teacher who “made me love the subject,” she said. She also wanted to attend the University of Montevallo, but was dissatisfied with the school’s scholarship offer.

“She’s just a fantastic girl. She’s beautiful, she has a 4.0 (GPA), she’s the most humble student I have ever met. She doesn’t know she’s pretty, she doesn't know she’s smart, she’s 100 percent a rock star."

A friend suggested Payne consider Judson, the private women’s college about 30 minutes from Centreville. She was intrigued by its diminutive size, preferring that over Alabama’s larger campuses. “I went and toured Judson, everybody was very nice, it was very personable and I really liked it,” she said.

One semester in, Payne began feeling “off” on the day she celebrated her 19th birthday in mid-February. Already tired from an 18-hour class schedule and work-study assignments, she lived to nap. She skipped lunch to nap. She skipped dinner to nap. People noticed, including her mother. She began a recurring low-grade fever but was unbothered. It might be a sinus infection, she thought. Then she found a swollen lymph node on the right side of her neck.

“Mine has never done this before,” she said. “It was probably the size of a golf ball to begin with.”

So Payne did what most 19-year-olds might think appropriate. She sought advice from her Judson biology professor, who was blunt: go to the doctor.

From there, Payne and her family embarked on a months-long saga of repeated hospital visits and medicines that did not improve her health. While home on weekends, Payne would go to the Bibb Medical Center emergency room. “The first time they assumed it was an infection and they gave me a shot of something and they gave me an antibiotic,” she said.

She rested and returned to Judson. But the fever and swollen lymph node remained.

A second ER visit didn’t improve matters. Blood tests came back inconclusive. Doctors prescribed another antibiotic, but that didn’t ward off the fever or exhaustion. The swollen lymph node, though reduced, remained a concern.

It wasn’t until a third ER visit that a doctor sensed the gravity. “He said, ‘You need to get out of here, you need to go somewhere else,’” Payne said. “He said, ‘I don’t want to tell you anything that’s not true, but I want you to actually go somewhere where they can test you for more advanced things.’”

Payne, a straight-A student who loathed the idea of falling behind in class, returned to Judson with a referral to an ear, nose and throat specialist. Her health, though, didn’t cooperate. Along with the unflagging fevers and exhaustion, she began experiencing chest pains she thought were linked to a Covid-19 diagnosis that spring.

Back at the ER, scans revealed “big stuff” and swollen areas within her chest, she said. “That was the point where I was like, ‘Oh, God, I’m nervous now,’” she said.

In mid-April, a surgeon removed two of Payne’s lymph nodes during a biopsy in Tuscaloosa County. Before she woke up after the procedure, the surgeon sat down with her mother.

“He said, ‘I want to tell you a story about a girl that I met 20 years ago, and I’m not telling you this to scare you, but I just want you to be aware,’” Terri Payne said. The girl had Hodgkin’s lymphoma, he said, and still sends him cards and letters of thanks.

Not wanting to alarm her daughter, Payne’s mom waited before recounting that conversation.

The connection with UWA

Payne didn’t have one life-altering situation; she had two. And both reached full boil this spring. Doctors were beginning to zero in on her correct diagnosis, and she was deciding which school she wanted to attend this fall.

She preferred West Alabama. Of that, she was sure.

“Before I was too sick to tour, I came here and met Brenda Jones, and she’s the sweetest lady I have ever met. She’s kind of the initial reason I fell in love with UWA,” Payne said. “And then I toured the campus, and I was like, ‘This place is really nice, this is awesome, I really want to be here.’”

Jones wanted her at UWA, too -- and had great news when they finished the tour. Payne was eligible for an INSPIRE scholarship and UWA’s Presidential Transfer Award scholarship, but the application materials were due that day.

Payne, the 4.0 student at Judson, got to work, pulling out her laptop and writing the required essay as her mother drove home to Centreville. “I loved the school so much,” she said.

Scholarship recipients also had to interview with faculty, so Payne participated in an online Zoom meeting the day after her biopsy procedure. She knew it went poorly. “I felt like I really screwed it up,” she said. She was sore, “all stitched up and gross,” and wore a sweatshirt instead of interview attire.

She got the scholarship. But her health crisis was only intensifying.

On April 20, she received a preliminary diagnosis of Hodgkin’s lymphoma and a referral to an oncologist at Manderson Cancer Center in Tuscaloosa. One test begat another: a positron emission tomography (PET) scan, a pulmonary function test and an echocardiogram, all needed in advance of chemotherapy treatments. A technician noticed an irregularity on one of the results. And what seemed to be routine oncology tests became a day of fear -- a final diagnosis of stage 4 Hodgkin’s lymphoma and fluid buildup around her heart, which had been causing her chest pains.

Doctors told her to pick when she wanted emergency surgery, now or the next morning.

That night, doctors intentionally broke several bones to get inside her chest and drain fluid away from her heart, with a temporary tube installed to drain additional fluid in the coming days. Twice more this summer doctors removed fluid that had pooled around her lungs.

Doctors told Payne on July 8 that she was in remission. Classes at UWA started in August. And her chemotherapy treatments ended in October, creating hope that she could live in Livingston in the spring and enjoy the campus experience she craves. She was symptom-free and optimistic. But a November PET scan showed new abnormalities -- “hypermetabolic activity,” Payne said -- that may require more aggressive chemotherapy treatments in 2022.

Payne’s mother admits the scan results were a shock, another sign of the unrelenting stress. But her daughter’s sincerity returns when asked about succeeding as a UWA student amid chemotherapy treatments and the weariness that seems to have no end.

“My professors have been very nice and very accommodating,” she said. “It hasn't really hindered my ability to turn in my work at all. I’m one of those persons who want to be on time, I want to turn in everything in on time, I’m a 4.0 student still.”

Her voice raises, her eyes focus.

She’s convincing when she speaks.