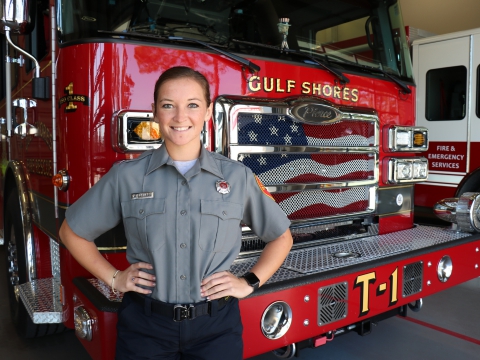 Ashlee Barnard is a firefighter and paramedic with the Gulf Shores Department of Fire and Emergency Services.

Classroom instruction and advanced training are cornerstones of academic program

Ashlee Barnard never intended to become a firefighter. After graduating from high school, she considered her next chapter essentially set: enroll at the University of West Alabama, become a Tigers cheerleader and pursue a career in athletic training, one of UWA’s most popular and professionally successful degree programs.

It didn’t matter that an admiration for first responders ran root-deep in her family. Her father is a sheriff’s deputy in St. Clair County, Alabama; her mother is a nurse and paramedic. Both are members of a volunteer fire department.

Barnard’s plan morphed, though, when she learned about the UWA student firefighter program that offered advanced training and a pathway to employment, not to mention a scholarship opportunity. “That would be a really cool thing to do,” she thought, so she signed up. Exposed to introductory EMT training and classes at the Alabama Fire College, the Tigers cheerleader eventually realized what was happening.

That career-shaping alteration led Barnard to become one of the first students in UWA’s bachelor of science degree program in public safety, which is part of the university’s online offerings. (Certain on-campus classes in the program are available, as well.) Now 24, the 2020 UWA graduate is a firefighter and paramedic with the Gulf Shores Department of Fire and Emergency Services, a role she instinctively links to the classroom instruction and advanced training she received at UWA.

“It is a great, well-rounded degree that has taught me different aspects of the public-safety career field and helped prepare me for when I am able to begin my master’s degree,” said Barnard, who has also worked with the Livingston Fire Department. “I think it set me up very well because it had a lot of different aspects to it instead of it just being one set track of things that you learned. I had several different branches that I learned from.”

That academic diversity, says Dr. Barbara Russo, assistant professor of public safety at UWA, is critical to differentiating the program from those at other universities. Public safety majors at UWA must select three 15-hour concentrations from a list of seven options that allow students to tailor their degree for specific professional roles. Two of the concentrations are rooted in public safety: homeland security and criminal justice. The remaining five -- psychology, sociology, political science, management and computer science -- are scattered throughout the university’s colleges and departments and offer instruction applicable to a variety of first-responder professions.

“They can cater it to their interests,” said Russo, a 20-year fire-service veteran who previously worked as the University of Mississippi’s first emergency management coordinator.

Though the degree program is open to traditional students such as Barnard, a majority of enrollees are professional first-responders interested in returning to school for advanced training, said Dr. James Gilbert, an associate professor of counseling and psychology at UWA who also has two-plus decades of public-safety experience.

“I think it was just kind of meant to be that I went to West Alabama to cheer, and then I found the student (fire) program, and the student program was a huge part in me deciding that I wanted to do this. It's an awesome program.”

When advising students, Russo says she emphasizes the need for first-responders to have a “Plan B career” because of civil-service policies that often allow retirements after as few as 20 years of experience. In that vein, UWA’s public-safety degree program, she tells them, offers a cornucopia of options. Because it is largely online, police officers and firefighters from the Birmingham metro market are a pipeline for UWA.

“They need a second career to keep them busy for 20 years, and emergency management is a great segue for them coming out of traditional law enforcement or fire,” Russo said. “That seems to be the way they land in that profession if it's a second career. It's not uncommon for a law enforcement officer to retire and then go into emergency management as part of the fire department.”

Initially, UWA allowed professional first-responders to receive up to 42 hours of experiential or technical credit. Those credits are now capped at 15 hours, Gilbert said, with most students not receiving the full amount, a switch that emphasizes instruction and strengthens the program’s national reputation.

“We're kind of selective in how we do that. They have to meet certain criteria,” he said. “But what it does is it allows mid-career and later-career professionals to be able to come in and get college credit for advanced training that they've had.”

The increasing number of female firefighters

As a woman working in a historically male-dominated field, Barnard is fully aware that her gender makes her a workplace minority. She chuckles about how most firefighter equipment is designed for men -- she’s 5-feet tall -- and is thankful for mentors who’ve helped her develop skills that allow her to keep up with her male colleagues. “I normally tell people that being a girl in the fire service is like gaining 40 brothers. It’s a huge family, and that’s one of the reasons I love it,” she said.

Nevertheless, female firefighters, Russo said, “still fight a lot of stereotypes based on size, women being smaller and less strong. And I simply repeat that it's not brute strength; it's technique.”

As she’s entering her mid-20s, Barnard’s plan now is ambitious -- rise in the fire service, continue her advanced training and eventually pursue a master’s degree. UWA never strays far from those thoughts.

“I think it was just kind of meant to be that I went to West Alabama to cheer, and then I found the student (fire) program, and the student program was a huge part in me deciding that I wanted to do this,” she said. “It's an awesome program.”