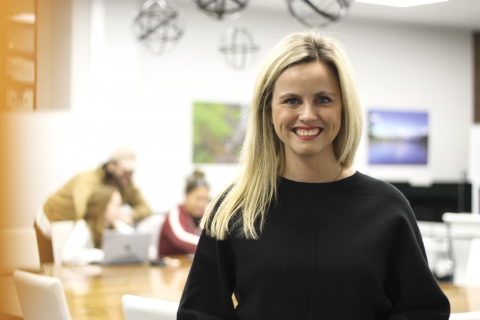 Dr. Amy Jones is chair of UWA's Department of Communications.

As silly as it seems, good-ol’ doughnuts -- not beignets from France, not baklava from Turkey, not cannoli from Sicily -- partially fueled Dr. Amy Jones’ path to the honorees’ table at the upcoming West Alabama Young Leaders Awards.

Jones, chair of the Department of Communications at the University of West Alabama, didn’t eat the sweets. She instead turned a chance encounter with a pastry-wielding teacher into a commitment to ensure that Alabama children were fed when away from school.

That commitment is a large reason why the Young Leaders Society of West Alabama has chosen Jones as one of the recipients of the United in Service Award for 2021-2022, said Emily Bryant, director of allocations and community partnerships for the United Way of West Alabama.

The ceremony will take place March 24 at the Embassy Suites ballroom in Tuscaloosa.

“There were so many amazing candidates and the stories that they shared, a lot of them revolving around service to children and families and helping to make sure that no one was hungry,” Bryant said. “There was not a single person that was nominated that was not worthy of the award. But Dr. Jones truly stood out.”

The doughnut story goes back a few years to a day when Jones visited one of her sons’ schools. When she asked the teacher about the doughnuts, the teacher said she gave a student one “because I don’t think he really gets much food at home on the weekends,” Jones remembered.

“It just kind of struck me about privilege and how privileged we are to not have to worry about food insecurity,” Jones said. “I'm not sure that it had fully crossed my mind that (my children) were in class potentially with students who didn't get food on the weekends.”

Once chance encounter then led to another.

The following week, Jones joined other members at the United Way of West Alabama board of directors meeting. Among the guest speakers was a representative from the West Alabama Food Bank in Northport, who detailed a “secret meals” program that delivers food to children who are underfed, or not fed, on weekends.

“That’s kind of how that all came about,” Jones said. “It was one of those things. Once you know something like that, you can’t just ignore it.”

“There was not a single person that was nominated that was not worthy of the award. But Dr. Jones truly stood out.”

The sudden arrival of the Covid-19 pandemic in the spring of 2020 exacerbated the plight of underfed students. Schools shuttered. Lunchrooms closed. Hunger ignored pandemic guidelines.

Motivated to act, Jones called her pastor, telling him that “this is just really heavy on my heart.” And that call hatched a plan in which her church and a few families coordinated a secret meals weekly food drive. Local residents in Sumter and Marengo counties donated extra bags of groceries, large brown-paper bags full of canned goods, rice, cereal, pasta and other non-perishable items.

Using a Demopolis fire station as a distribution point, Jones and the volunteers would pack and give out as many as 200 bags of groceries each week during the height of the pandemic. School resource officers delivered provisions to children’s homes.

Those doughnuts made a difference.

“It really was this huge community effort that kind of stemmed from the knowledge of just knowing that in your community there's food insecurity, and that food insecurity directly impacts education,” Jones said. “These kids in these schools, they can't learn as well as they could. If they weren't hungry, if they had food in their stomach, they would be able to learn better.”