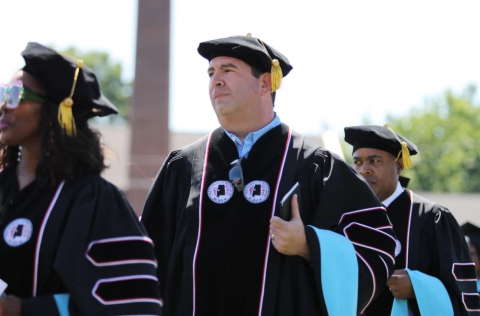 Up in DeKalb County, near Lake Guntersville and about an hour’s drive from Huntsville, is where Brandon Renfroe teaches science at Geraldine High School. By almost any metric, from demographics and geography to socioeconomics and politics, that region of northeast Alabama’s Appalachian foothills seems as far from Livingston and the Black Belt’s western counties as it can be.

When he enrolled at the University of West Alabama, Renfroe’s innocent obliviousness about Sumter County’s realities began to dissolve. Impossible to ignore was the modern-day poverty that remains intertwined with the land once dominated by antebellum cotton fields.

“It's the old dictum,” he said. “It's better to light a candle than curse the darkness.”

The first is the Future Rural Educator Scholarship, a new one-year award at UWA that will offer two high school graduates from the Black Belt region $500 each. The scholarship is geared for minorities who are first-generation college students and majoring in education. Renfroe, who is contributing $1,000 a year to the scholarship, is both its originator and its first donor.

The second is an embryonic effort to combat food insecurity among K-12 students in the Black Belt, where that malady is 11 times the national average, Renfroe said. Using University Charter School on UWA’s campus as a starting point, he wants to raise donations to make the option of weekend take-home meals available to all UCS students who need them.

Renfroe, who graduated this spring from UWA’s Doctor of Education in Rural Education program, dedicated his dissertation -- “Food Insecurity Among Students in Alabama’s Black Belt” -- to sustenance's role in children’s well-being, but also in their ability to focus, learn and blossom at school. His dissertation recently received UWA’s Ed.D. in Rural Education’s Distinguished Dissertation of the Year Award.

He admits there’s a risk in sounding grandiose about reducing food insecurity because “there aren't easy solutions.” But he’s willing to try.

“I'm being honest with you,” Renfroe said, “you look at the Black Belt, how do you even begin to redress issues that have been 200, 300, 400 years in the making? How do we even begin if we're talking about equity versus fairness? What would that look like in terms of how do we talk about reparation or redressing wrongs that have been perpetrated even before our country was a country? And what does that even begin to look like in terms of trying to address this?”

“My donation was meager. We gave $1,000. That's a drop in the bucket that will basically buy three textbooks. But what we're hoping is that others will see the benefit of that.”

Dr. B.J. Kimbrough, UWA’s chief diversity officer and dean of the School of Graduate Studies, admits the obvious: “This is a very rare case.” It’s uncommon for graduating students to both propose and partially fund a new scholarship before commencement day. But Renfroe’s background -- an Alabamian of faith with nearly two decades of teaching experience and no plans to seek a tenure-track position at a university -- is a different breed.

“He's a teacher. He's an educator. He's not like deep pockets or whatever,” she said. “He’s very frugal … But he's also a lover of learning.” Earning his doctorate, Kimbrough said, wasn’t based on career aspirations or pay increases; Renfroe’s desire was to learn, to improve. And discussions between student and advisors quickly turned to what the university’s graduate school dean described as a doctorate-level project that “has the potential to do some great things.”

The notion of starting a scholarship for rural educators didn’t start with either a revelation or financial need, Renfroe said. It was organic, a thought and a question. “I told Dr. Kimbrough that I have been so moved by what I've learned through my studies that I would like to start a scholarship. I didn't have anything particular, but I said, ‘Dr. Kimbrough, how would you go about doing that? Because I have no knowledge of that.’”

A month or two passed.

And then it was done, a lightning-fast accomplishment for what often takes eons in the glacial pace of higher education. Idea became concept became reality, seemingly overnight.

“It was actually all his idea,” Kimbrough said. “We labored the idea probably about a month or so before I even reached out to (UWA’s development office) about it. But he wanted to be very intentional about who got the scholarship and what area he wanted the student to come from and all of that.”

The two candles are intertwined, Renfroe said, the food insecurity that disproportionately affects academic performances of Black Belt students, and the need to increase the roster of rural educators with the expertise required to navigate the region’s peculiarities. Improving one outcome pales when compared to simultaneously improving both.

“Who's going to be teaching them?” Renfroe said. “What can we do to help, especially like first-generation students that maybe have never gone to college? Let's start a scholarship for future rural educators that will help minority students to get an education.

“My donation was meager. We gave $1,000. That's a drop in the bucket that will basically buy three textbooks. But what we're hoping is that others will see the benefit of that.”

Kimbrough, whose family has Black Belt ties, is adamant about the possibilities surrounding the Future Rural Educator Scholarship. Viewing it through her eyes, or Renfroe’s, is wholly different than seeing it from a student’s vantage point.

“The Black Belt is an impoverished area, and a lot of these students are coming from small-world schools, sometimes with limited opportunities,” she said. “And so whether it's $500 or $1,000 for a first-generation college student whose parents or families are saving up and they're using financial aid, every penny counts. Just to have somebody care enough to supplement, whether it's a book or a food voucher, to have somebody care enough to take that burden off of them, that's just overwhelming. That's what this scholarship will do.”