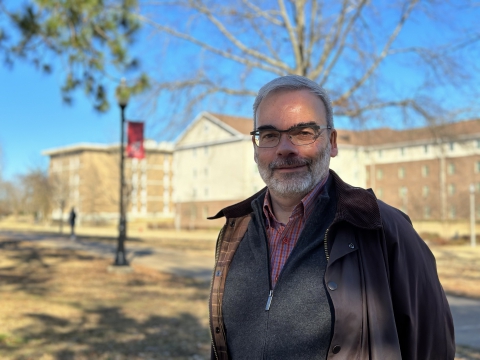 Dr. Thomas Saile teaches at the University of Regensburg in Germany.

International professor is teaching a class on early history of Europe

The impetus for Dr. Thomas Saile’s 5,000-mile journey from southeast Germany to the University of West Alabama is steeped in academic cooperation between institutions separated by international borders and the Atlantic Ocean. But it also carries a simplistic twist.

“While searching for funding organizations, I came across Fulbright's Scholar-in-Residence program more or less by accident and thought: that's it, let's try that,” he wrote in an email.

As a result, Saile, chair of prehistory and early history at the University of Regensburg, is spending the spring 2023 semester as a Fulbright Scholar-in-Residence at UWA, where he is teaching one class and will explore research interests and immerse himself in the community in and around Sumter County.

“Fulbright scholar residents aren't easy to get, both for the person applying and for the university accepting them,” said Dr. Mark Davis, dean of international programs at UWA. “They want to make sure the scholar will have an influence, preferably a lasting influence, on the time at the school they’re at, not only in academics but in culture, as well.”

Saile’s university in Regensburg, a Bavarian city of 150,000, is situated not far from the Danube River about 90 miles from the border with the Czech Republic. Despite the distance from Livingston, he isn’t a stranger to Dr. Ashley Dumas, an associate professor of anthropology at UWA. The pair were among a group of archeologists who met in 2015 at a scientific conference in Romania. Cultivated in subsequent conferences and Zoom meetings, those professional friendships eventually led to Dumas’ Fulbright-related trip in Poland last semester and an effort to bring a visiting professor, via Fulbright, to UWA. Over time, they discovered they shared research interests and goals regarding international collaboration.

“Thomas is not just an acquaintance of mine,” Dumas said. “He's a full professor and chair of his department at his university, so he understands higher education from his perspective. Bringing him here and having his attention to our students and our community is something that helps. It contributes to an internationalized culture.”

Beginning this month, Saile is teaching one section of a 400-level special-topics class called “Cultures on the move: Prehistory and early history of Europe” that can be taken for anthropology or history credits, Dumas said. Saile believes the course’s scope will challenge both him and his students, who will explore Rome’s creation and influence on early European history; the formation of European nations; the continent’s migrations; and the introduction of agriculture in the 6th millennium BC.

“This will also be a big task for me,” Saile wrote in an email. “Normally, as archaeologists, we deal with individual sites and sometimes lose sight of the big picture.”

Because classroom instruction is only one part of the Fulbright Scholar-in-Residence program, Dumas is eager to watch Saile fulfill its broader mission. Saile could become a popular speaker for community groups throughout the Black Belt or help with introductory German language classes when he isn’t pursuing his research areas, Dumas said. Saile’s wife is a biologist, which could spur an interest in UWA’s Cahaba Biodiversity Center should she visit her husband this spring.

“The scholar doesn't come and just sort of sit on a pedestal and extol how they're different and better,” Dumas said. “They come in, they teach a class, and the more activities in which they're involved in the surrounding community, the better. Thomas will be acting as a diplomat and an ambassador from Germany to Alabama.”