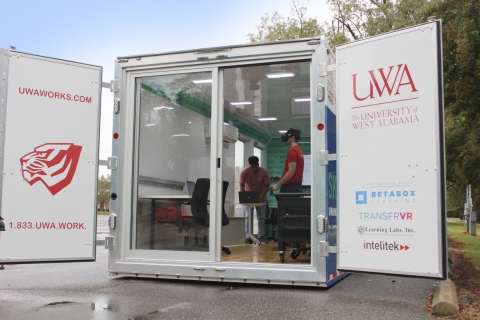 Since its establishment, the University of West Alabama’s Division of Economic and Workforce Development has focused on improving the outlook for industries and residents in and around Sumter County. That assistance is now receiving national attention.

The American Association of State Colleges and Universities (AASCU) recognized the UWA division with its 2022 Excellence & Innovation Award for Regional and Economic Development. In an email announcing the award, AASCU President and CEO Mildred García said the organization’s awards committee selected UWA “for its outstanding results and potential to influence and serve as a model for other institutions.”

AASCU will present the award to UWA representatives at its 2022 Annual Conference Nov. 13-15 in Carlsbad, California.

“For us, it's validation that this work is important,” said Dr. Tina Jones, UWA’s assistant provost and Division of Economic and Workforce Development vice president. “We are excited to have been selected for this honor, but we are more proud for our region. The award would not be possible without the hard work of our partners and their belief in this region and its future.”

Created in 2018, the UWA division has become a “one-stop shop” for job creators, business owners, industrial leaders and residents seeking employment. Training programs designed to elevate workers’ skills and community capacity are one of the division’s main roles. Other programs include site-selection assistance for industries interested in investing in Alabama’s Black Belt region and liaison efforts between business leaders and regional workforce councils, Alabama Department of Commerce and the state legislature in Montgomery.

“The outstanding work that this Division has done since its inception a few years ago has been transformative and helps strengthen the region’s outlook for the next generation,” said UWA President Ken Tucker. “Dr. Tina Jones, Allison Brantley, and their team continue to focus on innovative solutions to problems that have long been considered insurmountable, and I am pleased to see this work recognized nationally with this prestigious award from AASCU. Our University is committed to the research and practices that will continue moving our region forward in a positive direction, and we are very appreciative of this national recognition.”

In the division’s written application for the AASCU award, UWA’s team leaders highlighted the profound need for improving these services not only in the Black Belt, but specifically in Sumter County where the university’s campus is located in Livingston. Overall, the state of Alabama’s economic and business outlook has strengthened, but the reality for Black Belt counties has been different.

Despite those challenges, UWA’s division boasts a resume filled with successes, not the least of which was its lead role in recruiting Enviva, the nation’s largest producer of industrial wood pellets that plans to invest $215 million in the Port of Epes Industrial Park. UWA has also created a business incubator, the Black Belt Development Center; aided six business expansions; gained more than $5 million in economic and community development grants; houses an Alabama Career Center System office, the Livingston Career Center; and used a $2.5 million workforce development grant from the U.S. Department of Labor for a Leveraging Integrated Networks for Change and Sustainability, or LINCS, program.

Allison Brantley, the division’s economic development director, said she and her colleagues waited until this year to apply for the AASCU award to present a larger and more complete body of work to that organization’s awards committee.

“We had more time to complete a lot of the grants, and the programs that we started, we were able to finish,” Brantley said. “We were able to recruit Enviva. We launched the Skills on Wheels mobile training program. We were awarded $4.7 million for Port of Epes infrastructure. Before we were just starting and in the middle of some programs, but this year we were near the end, and we had more definite plans and goals going forward.”

One of the foundations for the division’s success, Jones said, is helping students earn internships and participate in experiential learning experiences. A prime example is UWA’s Integrated Marketing Communications (IMC) major within the College of Liberal Arts’ Department of Communications.

The initial undergraduate IMC major began in 2013 and has since added sports communications and graphic design tracks to its traditional option. Students majoring in one of IMC’s three tracks are eligible for internships and experiential learning opportunities from one of the program’s 180 industry partners, said IMC Director Dr. Amy Jones, an associate professor of digital communications. The major’s required professional media internship courses have coordinated 332 placements in more than 200 companies, Jones said. Of those, nearly 75 percent of UWA’s student interns have worked for Alabama-based companies.

The members of AASCU’s awards committee aren’t the only people to recognize UWA’s success in economic and workforce development, Brantley said. It’s increasingly being noticed by the Black Belt industries and entrepreneurs, as well.

“And it's growing,” she said. “The fact that some existing partners have introduced us to others, it's a ripple effect that keeps spreading further.”