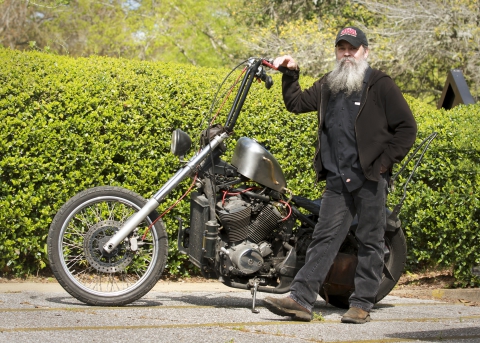 Tommy Hutchins and his Honda motorcycle are familiar sights on UWA's campus.

If there’s any doubt that Tommy Hutchins is a bike guy, a gearhead who finds happiness while straddling horsepower, it’s dispelled in a single story so outlandish that it nonetheless must be true.

“I like to enjoy the ride, but I'll ride anytime,” said Hutchins, 52, a pressman at University of West Alabama Printing Services for a quarter-century. And with that he recalls a specific winter day when neither the thermometer nor common sense could deter him.

“My hands froze to the handlebars and I couldn't stop when I got off the interstate,” he said. “I had to keep going to a stop sign because I couldn't pull the brake.”

“Well, after the first time you do it,” he said, “you learn to exercise your fingers on the 30-minute trip.”

Hutchins’ well-known adoration for his motorcycles -- two Hondas, including a chopper -- has no specific relevance to his job at UWA. (On rainy days he often drives his Steve McQueen-styled Ford Mustang Bullitt, which he also loves.) But it does hint at the diversity of spirit and mechanical expertise he brings to the Livingston campus.

“I've always liked taking stuff apart and putting it back together. Working on my bikes has given me a lot of confidence."

Renowned for its product quality and production capabilities, UWA’s Printing Services owns a slew of national awards that belie the size of its staff. In 2019, the department won a first-place gold award from the In-Plant Printing and Mailing Association -- its seventh gold since 2007. Once the go-to campus shop for branded envelopes, letterhead and business cards, the department now produces a majority of the printed materials needed at UWA, from full-color brochures, flyers and posters to newsletters, paperback books, banners and tickets.

Surrounded by a collection of dissimilar printers, collaters, folders, cutters/trimmers and binders on the first floor of Webb Hall, Hutchins’ role as a master craftsman is to take the digital expertise of UWA graphic designer Michele Hagood and shepherd it through the production process. Technological advances have made his job less hands-on -- less ink on his fingers -- but not less labor-intensive. Two-plus decades as a printer have trained his eye to recognize incorrect shades of UWA’s official red school color and pinpoint quality mishaps before items are finalized.

“Basically, the computer has taken out all the stress, all the setup, all the what we call the make-ready,” said Hutchins, who won the university’s Support Staff Excellence Award in 2010. When he first began at UWA in 1996, much of the presswork was done with a technician’s physical touch -- mixing of inks, choosing shades for specific paper stock, aligning margins. Hutchins harbors a twinge of regret that his printing duties now rely less on an ability to manipulate ink and color and paper. Today’s array of computerized printers in Printing Services illustrates the difference.

Nevertheless, “the time saving is phenomenal,” he said. “The digital presses are a godsend. We do stuff now that there's no way we could have done back 15 or 20 years ago.”

From Okinawa to Livingston, Alabama

Before the motorcycles and printing expertise and the gray-streaked beard that tickles his belly, Hutchins came from an unlikely location -- Okinawa, Japan -- where his dad, Marine rifleman James Hutchins, met his mom, waitress Sueko Sakihama. They married, welcomed their first son and moved to the United States, settling first in Myrtle Beach, S.C.

The family relocated to Burlington, N.C., a textile city of 50,000 people about an hour south of the Virginia state line that Hutchins considers his childhood home. When he was 10, his dad took a job and moved the family again, this time to Alabama.

“It was just a job, a profession,” Hutchins said. “I'm sure they offered him a little more money to make it worth it and stuff, but he came here just blind.” But Livingston wasn’t Burlington. Everything was smaller, quieter, a bit stranger. When Hutchins and his younger brother, Scott, would ask where things were -- hamburger joints, stores, restaurants -- they’d get a disappointing response. “Oh, there's 30 miles that way and an hour that way,” he said, his arms gesturing as if giving directions, “because there was nothing here. There wasn't even a Hardee’s here at the time. Dandy Don’s, where Jack’s is now, was the only fast food place in town. We used to go there all the time.”

What Hutchins didn’t know was that his dad’s factory job as a die-maker for cardboard boxes set him on an unintentional path to UWA’s print shop. He began working at a Sumter County company the summer after he graduated high school, pulling 12-hour night shifts cutting paper sheets that would become boxes for Little Debbie cookies and VHS tapes. The hours were terrible; the pay wasn’t bad. So he kept at it.

At another job he made more money, learned advanced skills and earned promotions. He cut paper. He loaded paper into machines. He escaped third shift. He became a “flyboy” -- a pressroom apprentice. He learned to handle ink and clean presses, a messy task that stains everything it touches. His trade took shape. “Anytime they would offer me a job that was different in that plant, I would take it,” he said. “I never knew what I'd wind up doing, but I've always enjoyed working with my hands, and so I was happy with it.”

The confidence of a motorcycle repairman

At work, Hutchins is surrounded by university-related artwork but doesn’t consider himself an artist, or even artistic -- which is odd, perhaps, given his intimacy with colors and inks and visual imagery. Graphic design is someone else’s expertise, he says. But he does enjoy the creativity involved, whether it’s from printing VHS labels or university publications.

“If you know what you're doing, you can't just slap something on the press and turn it on and walk off,” he said. “You have to sit there and be like, ‘It's getting too dark, or something's off here.’ I think you've got to have a good eye for it.”

The countless hours spent tinkering on motorcycles -- grease instead of ink massaged into his fingerprints -- has sharpened his skills as Printing Services’ do-everything man: printer, technician, production manager, repairman. There’s a Craftsman toolbox near his desk. “I've always liked taking stuff apart and putting it back together,” he said. “Working on my bikes has given me a lot of confidence."

His father, the Vietnam-era Marine rifleman, always told him money was largely irrelevant if the job was brutal, if salaries dominated happiness. He’s never discarded that guidance about workplace balance. That’s why Hutchins today works at UWA and lives 10 miles down the road in York. He “hates big cities now,” he said, and yes, he acknowledges the irony, how four decades of maturity have altered his outlook on what’s important.