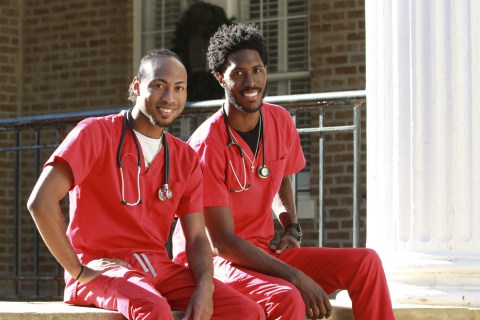 Devon Williams, left, and Cameron Preston are nursing students at the UWA.

Preston, Williams are excelling in Division of Nursing program

Initially, at least, Cameron Preston’s career aspirations didn’t include scrubs and stethoscopes. The University of West Alabama, where he’s a senior, was less than an afterthought. “Actually, I wanted to go to the NBA,” he said. “But God had other plans for me.”

To the west, Devon Williams enrolled in community college and planned to transfer to another school in his home state of Mississippi. That he’s now a junior at UWA is a testament to advice from his grandmother, who encouraged him to become a nurse, and a friend, who urged him to visit Livingston.

Paired together, Preston and Williams exemplify the success of UWA’s Project EARN scholarship program and illustrate how the university’s Ira D. Pruitt Division of Nursing is helping diversify the nursing field.

Project EARN -- Educating Alabama Rural Nurses -- bloomed after UWA received a $2.4 million grant from the Health Resources and Services Administration (HRSA) in 2020 for nursing-student scholarships during the next five years. Eligible students must meet strict financial and educational criteria, with those who are first-generation college students and those who attended educationally disadvantaged high schools meriting top consideration.

Recipients are awarded up to a $4,000 scholarship each semester and a $350 stipend in their final semesters to defray post-graduation licensure costs.

“(The scholarship) was extremely important; I actually might not have come had it not been the case. I was trying to tally up how much scholarship money I would potentially have, and it was one of those tough calls.”

Though they arrived at UWA in different manners, Preston and Williams both say Project EARN’s substantial award softened their path to Livingston.

“It was extremely important; I actually might not have come had it not been the case,” said Preston, 22, a Snead State Community College graduate who was born in Mobile but grew up in Atlanta. “I was trying to tally up how much scholarship money I would potentially have, and it was one of those tough calls.”

Williams, 23, of Stonewall, Mississippi, admits that he could have juggled his tuition bills at UWA without a Project EARN scholarship. But the struggle would have been arduous, or worse.

“My family isn't the richest and we’re not the poorest, we’re middle class,” he said, “and so I still had to pay for school almost out of pocket. Because all of my scholarships didn't pay all the fees, I was looking at more schools and more opportunities.”

At UWA, Preston and Williams found a scholarship program seemingly tailor-made for their situations. They also met faculty members who embraced the opportunity to recruit male students into a major historically dominated by females.

Before the start of the Covid-19 pandemic, men were already becoming nurses at previously unseen rates in the United States. In 2019, 12 percent of registered nurses were men, a significant increase from the 2.7 percent in 1970, according to data from the U.S. Bureau of Labor Statistics. Similar data from the HRSA’s recent nursing workforce survey show that the number of men in nursing increased from 27,000 in 1977 to 310,000 in 2018.

Nevertheless, women continue to represent an overwhelming majority of nurses in the United States. At UWA, only four of the 41 current nursing students are men, according to Dr. Mary Hanks, the nursing division chair.

Preston and Williams aren’t bothered by the imbalance.

“I feel like it’s equal to everybody,” Williams said. “Before I went into the nursing field, I worked in west Texas, which is the oil fields, and we had women working with us also, so I’m used to seeing different (people). True enough, it’s dominated by women, but I don’t feel like anyone treats us differently. They want more males to be in the program to lead the way for the younger generation.”

Preston admits he’s embracing the challenge, but chuckles when recounting how he and his male colleagues “struggled” with the class devoted to pregnancy and childbirth.

“A lot of that stuff is not familiar,” he said. “Female anatomy, we all had that class, but this goes way further than that.”

Williams, who envisions becoming a nurse practitioner one day, understands that health-care expectations of patients and their families aren’t universally similar.

“You’re going to get people who say it’s a women’s field,” he said, “but some men who may be sickly may not want a woman helping them get dressed or feed them. Because it might be a pride thing, that’s when the men have to step up and help. Some cultures don't like women nurses helping their husbands, and they can’t just go and get the doctor to help them. That’s when the male nurses come in.”

After graduation, Preston wants to work as a travel nurse, perhaps in a medical-surgical role. But his long-range goal is nonetheless loftier.

He wants to own a hospice-care company.

“I know in the hospital, and even my mom does some hospice care, I’m always seeing some people who aren’t getting the care that they need,” he said. “Sometimes you see like a 70-year-old woman who has pressure sores the size of tennis balls on her back or her side because the care that she needs isn’t really there.”