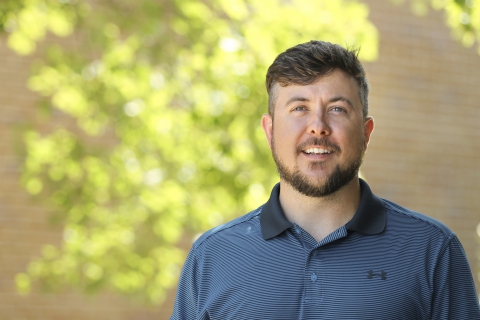 Dr. Tyler Strickland spent the last three years assisting the bands at the University of Iowa.

Dr. Tyler Strickland is a piano-playing, would-be percussionist from Birmingham who longed to bang drums in his school band, learned instead to play saxophone, married Auburn University’s first female drum major, directed high school bands in two states and spent the last three years as a graduate assistant with the University of Iowa bands.

Now he’s in Livingston -- 750 miles south of Iowa City -- after being named this summer as director of bands at the University of West Alabama. His excitement couldn’t be more palpable.

“There's a tremendous potential for growth,” he said.

While potential may be abundant, time is not. Strickland’s first day at UWA was June 24; the fall semester began Aug. 15; the Tigers’ first home football game is Sept. 17. And besides the unavoidable hassles of relocation -- finding a place to live, especially -- Strickland has been tasked with preparing the Marching Tigers for their official 2022 debut while also learning his students’ names and what instruments they play.

Roughly half of the band’s 56 members are first-time performers at UWA, either freshmen or transfer students. Strickland didn’t hear them play until they warmed up on an early morning at the beginning of band camp in August. All he knew came from the band’s student leaders, which was comforting but not necessarily authoritative.

Instead, the 36-year-old Strickland smiled.

“It didn't matter, because I know that whatever they've got, we can work with it and make it better,” he said. “That's kind of the job. I've never been the person that thought they were supposed to be handed a turn-key band. Part of the job is being able to make people better musicians.”

From Alabama to Iowa, and back

Given that his father, Bobby Strickland, played football at Auburn (1968-1970) and was drafted by the NFL’s Buffalo Bills, Strickland’s story would be more linear had he become an athlete or a coach, a son following his father’s path.

But blame his mom, who had the parental temerity to take piano lessons.

She didn’t play another instrument, Strickland said, and wasn’t musical. But when he was 4, she “just decided that she wanted to play piano,” which almost instantly pit son against mother.

He, too, wanted to take piano lessons.

A year later, when he was 5, she relented. For the next seven years, Strickland immersed himself in music, fertilizing his interest by learning to read notes and play the piano like his mother. The seed was firmly planted when he joined his school band, whose director convinced the aspiring drummer to learn the saxophone. Musically, at least, those piano lessons eased his transition to a woodwind.

“I think there was a certain part of me that was musical, that wanted to be musical,” he said, “but I think a lot of it was the band at my school. We started in fifth grade, and that was kind of what everybody did. You joined the band.”

That adoration of bands and their music fed an addiction that hasn’t waned. At Auburn -- the only school to which he applied -- Strickland joined the university’s marching band. (That’s where he met his wife, Ashley Norwood-Strickland, a former AU drum major.) His father didn’t want him to major in music education “because band directors don’t make any money,” so he enrolled as a business administration major, an experiment that fizzled after two years. Strickland’s interest couldn’t have been more tepid. “There was just one day where I called him and said, ‘Look, I can't do this business thing anymore. I'm switching to music,’” Strickland said. His dad didn’t put up a fuss.

While his wife was finishing her education, Strickland taught band at a Mississippi high school and then at Reeltown High School not far from Auburn. When deciding on a doctoral program, he selected Iowa in part because of the quality of marching bands in the Midwest and the opportunity to learn in an environment foreign from his Southern background. “I wanted to get out of the (Southeastern Conference) and have some outside experience because the Big Ten traditions are different from those in the SEC,” he said. Though he was a teaching assistant, the leadership structure of Iowa’s band program allowed him to write and lead performances normally reserved for full-time directors.

“I think there was a certain part of me that was musical, that wanted to be musical, but I think a lot of it was the band at my school. We started in fifth grade, and that was kind of what everybody did. You joined the band.”

Last football season, Strickland wrote four of Iowa’s six halftime shows and helped direct its concert band, university band and symphony band, in which he also played the bass clarinet. “I didn't have wrinkles before I went to Iowa,” he said. After he graduated in May with a doctor in musical arts degree, the Stricklands began plotting their next steps, choices the pandemic’s isolation helped make.

“That changed with our feelings about moving because we weren't as able to see family during that time,” he said. “We had to stay in Iowa a lot, we didn't get to come home for holidays. So decided that we wanted to get back down close to home, and we feel very fortunate (to be at UWA).”

Two months into his Livingston tenure, Strickland has ideas. Most sound imminently doable rather than aspirational. He wants to double the size of the Marching Tigers’ roster by next year. Recruiting for UWA’s band is strengthened, he believes, because of the university’s commitment to offer scholarship opportunities to band members. Plans for the university’s pep and concert bands aren’t far away. He’s never seen a football game at UWA and is oblivious to the campus’ fall Saturday vibes, but he’s determined to create a game-day atmosphere that belies the band’s diminutive size. It’s as if Strickland and his dad, the former Auburn linebacker, are game-planning their next opponent.

“You have to be prepared to play very short snippets of music, impactful snippets between downs,” Strickland said. “You can't just play long tunes during the time out. You have to be engaged and active. That's how I built an appreciation for the band at Reeltown, through that same type of thing, understanding how football works and being ready to play -- between first down and second down, between second down and third down. When you're on defense, let's play something really impactful before fourth down. When they're going for it on fourth down, we’ve got to play something really loud and be super impactful so that you help create a crowd environment, a crowd atmosphere, a home-field advantage.”

As he sits in his Foust Hall office, Strickland can see the Marching Tigers’ band room through the door. He can hear students when they arrive. His years playing in and directing bands tell him to pay attention to more than foul notes and marching missteps.