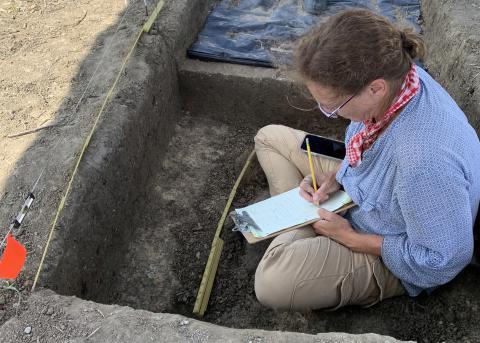 Generations of archaeologists have long sought the historical Holy Grail of the Battle of Mabila, the Alabama site where Spanish explorer Hernando de Soto defeated Chief Tuskaloosa and his Native American warriors in 1540.

That centuries-long effort remains unfulfilled. But a project directed by Dr. Ashley Dumas, an associate professor of anthropology at the University of West Alabama, has discovered something nearly as important -- Chief Tuskaloosa’s territorial province of Mabila.

For two-plus years, Dumas and a team of archaeologists, volunteers, and UWA students have used GPS technology in Marengo County to document precise locations of pottery sherds, metal remnants and other artifacts they’ve determined are from the mid-16th century. When plotted on a map, the GPS coordinates have allowed them to pinpoint 141 distinct farmsteads -- small Native American homes each less than an acre in size -- that comprised one of the communities under Chief Tuskaloosa’s control.

The significance of what is called the Marengo Archeological Complex is two-fold, Dumas said.

First, the discovery of small farms from that time period illustrates a societal decentralization from the Native American Mississippian culture that built its communities around sizeable earthen mounds such as those at the Moundville Archeological Park south of the city of Tuscaloosa. At that site, Mississippian-era peoples built 29 mounds the 12th to 14th centuries.

“This type of settlement pattern is not common in the Southeast,” Dumas said. “We’re seeing, 150 years later, a completely new way of organizing society.” She described it as a “major upheaval” of Native American society and culture.

Second, the ability to radiocarbon-date specific findings has allowed archaeologists to determine that de Soto’s expedition moved through Chief Tuskaloosa’s province and made contact there with Native Americans. When corroborated with the four written accounts of the Spaniard’s travels, the farmstead discoveries have provided archaeologists information they hope could lead to a more consequential discovery.

“Obviously, we’d like to find the battle site,” Dumas said. “It’s as important as Jamestown or St. Augustine in the settlement of eastern North America.”

Along with more than 600 men and 200 horses, de Soto landed in 1539 near present-day Tampa, Fla., and eventually became the first European to explore deep into the American interior. Seeking gold and treasures, his expedition traveled north into what became Georgia, South Carolina, North Carolina and Tennessee. Wanting to resupply his men via ships from Cuba, de Soto began a meandering route into Alabama the following year on his way to the Gulf Coast.

De Soto’s party never arrived. As the Spaniards marched through Alabama, Chief Tuskaloosa rebuffed de Soto’s demand for slave laborers and women, and the Native American chief ambushed the explorers when they reached the fortified city of Mabila.

The battle, though fierce, was a decisive Spanish victory. As many as 2,500 Native Americans were killed, but de Soto’s men paid a heavy price, losing caches of supplies. Dumas called it a “pyrrhic victory” for the demoralized Spanish, who then headed northwest. De Soto died in 1542, either in Louisiana or Arkansas, near the banks of the Mississippi River. His remaining men eventually reached Mexico City.

“The Spaniards found out that with these scattered (Native American) chiefdoms, it wasn’t easy to conquer them,” Dumas said. “There wasn't a ‘head of a snake’ like in Central and South America.”

In Marengo County, Dumas and her colleagues have thus far found 52 confirmed pieces of Spanish-made metal, such as horseshoe remnants and iron chisels repurposed from the metal bands that strengthened wooden barrels. Dr. Charles Cobb, professor of historical archaeology at the Florida Museum of Natural History who has extensive experience researching 16th-century Spanish metal remnants unearthed in Mississippi, was instrumental in the project’s recovering and identifying of the Marengo County metal artifacts, Dumas said.

The metal artifacts will undergo elemental analyses for comparison to 16th-century pieces already proven to have come from Spain, Dumas said.

Native American pottery fragments at the site have similarities to items found at Moundville and in southwest Alabama, Dumas said, which illustrates the heterogeneity of mid-16th century Native American society. Likewise, the archeologists have used radio carbon-dating to determine the age of charred wood and items such as sunflower seeds, persimmon seeds and corn found at the Marengo County sites.

Interestingly, the farmsteads were “a colonization event” and “a short-lived phenomenon” that existed for only a few generations, Dumas said, for reasons largely unknown. One hypothesis, she said, is that the Native Americans were so shaken by their de Soto experience that they sought safety elsewhere.

The archeologists’ search for Mabila, though, isn’t finished.

“Along this multi-year journey (the Spaniards) encountered hundreds of Native American groups,” Dumas said. “This was a major culture-contact event.”