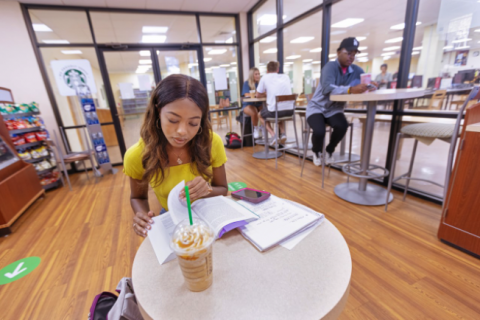 A UWA student studies in the campus library in Livingston.

Dr. Jan Miller is ecstatic that a renowned education association has accredited a degree program in the University of West Alabama’s Julia S. Tutwiler College of Education. She’s not satisfied, though. One isn’t enough.

“Anytime students can say, ‘My program was this accredited,’ it adds value,” said Miller, the college’s dean. “It's just a really big honor to have this national recognition because it sets us apart from the others.”

The National Association for the Education of Young Children, or NAEYC, announced in June that UWA’s Bachelor of Science in Elementary Education major with early childhood certification (preschool through third grade) was among five programs receiving first-time accreditation from the Washington-based organization. Now in its 96th year, NAEYC has accredited 214 programs in 39 states and U.S. territories since it began that process in 1985. Only two other degree programs at four-year institutions in Alabama own NAEYC accreditation.

“We want to get all of our early childhood programs NAEYC accredited,” Miller said. “But we just started first with our B.S. Elementary Early Childhood program because that's where most of our students are. We wanted to say that they could have this added to their transcript when students complete our program.”

“These institutions meet high standards so that their students receive an education that prepares them to succeed in a diverse range of classrooms after they graduate,” CAEP President Dr. Christopher A. Koch said in a press release. “Seeking CAEP accreditation is a significant commitment on the part of an educator preparation provider.”

For UWA, the value of the NAEYC accreditation process isn’t singular, Miller said. Students gain from earning degrees from a program recognized for its quality. And education departments are tasked with meeting continual benchmarks and making refinements in order to retain accreditation. Miller praised the NAEYC report’s focus on continuous improvement, and said its suggested improvements made sense.

“To me, it sets us apart from other institutions so that when we market and when we sell our program, candidates are going to get the best of the best,” Miller said. “When we get outsiders to come in to evaluate our program, we can say they're great, but to have this gold standard added to our programs is a plus.”

A list of education degree programs at UWA can be found here.