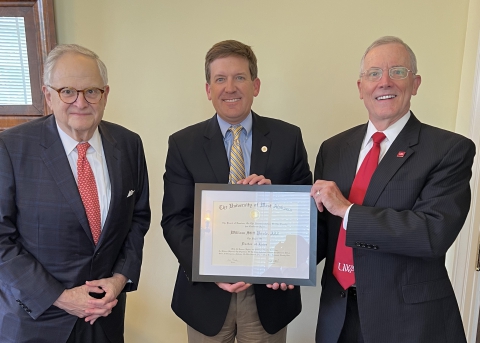 Former legislator renowned for his support of higher-education funding

Bill Poole may have been born in New Orleans, but Alabama’s western regions decorate his life. He hails from Marengo County. He graduated twice from the University of Alabama, including its School of Law. He represented much of Tuscaloosa County for a decade in the Alabama Legislature, where he helped shape the state’s public education budget.

Now the state’s finance director, Poole received an honorary doctorate from the University of West Alabama at this year’s spring commencement exercises at Tiger Stadium in Livingston.

“It's not an honor that I anticipated or expected, so certainly I am humbled and gratified and very appreciative of UWA,” he said. “Having grown up in that general region, I understand the importance of UWA as it relates to education, workforce development, economic development, quality of life, all of those things for that area of our state -- for that matter, of our whole state. So to be recognized and honored is really quite surprising.”

At the state Capitol, Poole built much of his political reputation as a master steward of the $8 billion Education Trust Fund (ETF), a driving fiscal force behind Alabama’s public K-12 schools, colleges and universities. Elected soon after the economic recession of 2008-09, Poole and his legislative colleagues were given the arduous task of protecting the fund’s integrity and helping it grow as the state recovered from the downturn.

“When I was elected to the Legislature, the first thing I set out to do was to try to be on that (ETF) committee, because in my judgment it can have the greatest impact on the future of the state as it relates to education, workforce development, and economic development,” he said. “The education budget is not only the education budget, it's the economic development budget, it's the opportunity budget. So I really felt like that was the place to be able to try to have an impact on Alabama.”

"Having grown up in that general region, I understand the importance of UWA as it relates to education, workforce development, economic development, quality of life, all of those things for that area of our state."

Likewise, Poole didn’t skirt the truth, and still doesn’t. The ETF, he recalls, “was in big trouble.” Major funding reductions were swamping the state’s public schools and universities, and new revenue streams were nonexistent. Where others may have recoiled from the stress of dealing with the calamity, Poole saw opportunity, if not duty. “I kind of felt like I wanted to do everything I could to mitigate that damage,” he said. “That was important to me.”

The Tuscaloosa Republican served for eight years as chairman of the House Ways and Means Education Committee, which oversees the ETF. He also became chairman of Innovate Alabama, a statewide commission that develops strategies for the state’s economy.

Gov. Kay Ivey described Poole as “one of the most gifted public servants Alabama has seen in many years” when she installed him as the state’s finance director in July 2021, ending his tenure in the Legislature. “His detailed focus on education funding demonstrates a depth of knowledge in our state’s budget process that few can match,” Ivey said. He also serves as the governor’s senior advisor.

Though removed from the Legislature and his committee chairman’s role with the ETF, Poole welcomed the opportunity. “It was kind of time for me to take on a new challenge,” he said. “It’s been interesting. There’s a new learning curve with new issues and new perspectives. I do miss (the Legislature) at times, but I'm enjoying my new role as well.”

Only 45 miles separate his childhood from UWA’s campus, though Poole admits he doesn’t have a direct connection with the university other than his involvement with appropriations for the state’s public colleges and universities. That, however, hasn’t stunted his opinion about UWA and its critical role in the future of Alabama’s Black Belt.

“Just its mere presence has a substantial impact and a substantial contribution (on the area),” he said. “But I have encouraged and argued and said for many years that we really need our universities to take an ever-more proactive role in economics. And I think UWA, to its credit, has recognized that and has worked hard in that fashion.