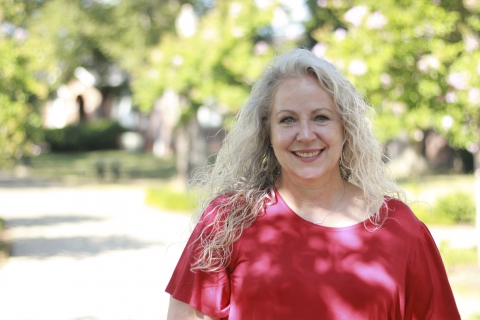 Penny Dew has worked more than three decades at UWA.

Given her public persona -- gentle, accommodating, motherly, helpful to a fault -- it’s a stretch to imagine Penny Dew doing anything that would belie her reputation as a woman whose 24-carat smile is a University of West Alabama landmark. Her Foust Hall office is adorned with jerseys and balls autographed by Tiger athletes. She refers to UWA’s coaches as “my coaches.” Her boss, Director of Athletics Kent Partridge, admits she is his department’s sole constant. “And thank the Good Lord for that,” he said.

And yet, there’s something fascinating about Dew, the farm girl from Thomaston who soon will begin her 32nd year at UWA.

Or, as she describes it, “I give shots.”

Ask UWA’s utterly cheerful special assistant to the athletic director about that skill and you get a TED Talk on the difference between intramuscular injections and subcutaneous injections, pink-eye inoculations and the length of the needles she uses when jabbing a cow. (They’re not as frighteningly long as you’d expect.)

Funny thing, though. “I hate needles,” she said. But she does it -- with a smile, presumably -- because she and her husband, Ernest Dew, live on and operate a Sumter County cattle farm with several hundred head and so many chores that Dew also cuts hay with a bush hog, but she stops there. On this, she’s resolute. “I don’t bail. I don’t like running the bailer.”

None of that, not the needles or cows or bush-hog duties, has anything to do with her athletic department role. The only link is Dew’s uber-genial outlook, which her colleagues say never withers.

“I look at life when I get up: I can have a good day or I can have a bad day, and I choose to be happy even if I'm having a bad day,” she said. “There's no reason anybody in here or on campus needs to know that I can weather my own storm or work it out however I need to. I think you pick how you want to be as a person, and I like being happy. I don't want to be sad.”

Partridge, a longtime fixture in UWA athletics, is an unabashed fan.

“Some may believe she knows where the bones are buried, but that does not suit Penny. That would involve sadness, and her smile defies sadness,” he said. “Every morning before I go into my office, I take a glance toward the already opened door to my right. I know then it’s alright for me to smile, as well.”

Two points resonate about Dew’s job. First, when you ask Dew what it means to be a special assistant to the AD, she’s surprisingly shy. “I don’t know,” she said. “I do whatever I do.” Second, she didn’t come to UWA to work in one of the athletic department’s top roles. Doors opened, and she walked through.

In tiny Thomaston, Dew grew up on her family’s farm, where she fed pigs and chickens and horses. (It was a “hobby” farm, she said.) After graduating from Demopolis High School, she enrolled at UWA in 1987, took a break for an out-of-state internship and returned to Livingston. In 1991 while still a student, she applied for a job as a medical transcriptionist in Dr. R.T. Floyd’s UWA sports medicine and athletic training office. She got the gig and stayed three years, long enough to school herself on medical terminology.

“Some may believe she knows where the bones are buried, but that does not suit Penny. That would involve sadness, and her smile defies sadness. Every morning before I go into my office, I take a glance toward the already opened door to my right. I know then it’s alright for me to smile, as well.”

When Dee Outlaw became UWA’s director of athletics in 1994, he recruited her to become his secretary. One promotion led to another, from the director’s secretary to the department’s secretary to the director’s special assistant, her role snowballing in size. The five-man roster of athletic directors for whom she’s worked now spans nearly three decades: Outlaw, E.J. Brophy, Stan Williamson, Bobby Wallace and Partridge.

Today, Dew’s desk is cluttered with papers and folders and memos and tennis trophies that soon will go on display elsewhere. That mishmash is a visual explanation of what Dew does -- a bit of everything, from monitoring budgets and purchases to overseeing hiring payroll forms and support-staff scholarships. Christi Wade, UWA’s associate athletic director for compliance, walked into Dew’s office earlier this month and heard someone ask about her job description. “She’s pretty much in control of the department,” Wade said. “She’s the one who keeps us in line.”

Dew laughed. “It's not one thing,” she said. “It's a combination. If you ask me, I do a lot of paperwork. But if you ask other people, they'll have a different opinion of what I do. You'd probably do better to ask my coaches what I do than to ask me, because what I do is I come in and I do my daily work.”

UWA’s coaches -- “my coaches,” in Dew-speak -- come and go, a byproduct of their nomadic profession. “I have to get used to that,” she said. “I hate when they leave, but I'm always super excited for them, for the new chapters in their lives. Some of them might keep in touch with, and some of them you lose track with, but the ones that really register with you, they're like family.”

She cherishes the signed soccer balls from the university’s inaugural men’s and women’s teams that adorn her desk. An autographed women’s jersey decorates her wall. Her Facebook friends list is populated by former UWA athletes, many of them international students who returned to Europe or Australia or South America after their UWA days were complete. With them, the motherly instinct is both real and strong. “I always wanted a house full of children, and I was blessed with one,” Dew said. “I think this is God's way of saying, ‘Hey, you get to be a mother to these kids when their mothers can't be there.’ And to be honest, I think of them as my kids.”

The special assistant to the athletic director who runs the department wouldn’t have it any other way.

“I love this university,” she said, and then offers a story about how common it is for people to see her walking across campus and noticing a piece of paper trashing up the place. “I'm going to pick it up because this is my home and I want it to look nice. I know it sounds crazy, but I take pride in this place. I've lived here longer than I've lived anywhere in my life, and this is home.”