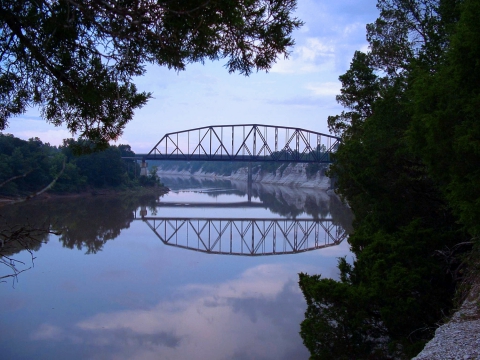 The Chalk Bluffs are seen beyond a bridge over the Tombigbee River. (Submitted/Dr. Tina Jones)

The day after President Biden signed the National Heritage Act into law, the phone rang on Dr. Tina Jones’ desk at the University of West Alabama. The caller was two time zones away, a Ph.D.-holding Californian who sought Jones’ help.

His question: Could she help him and his wife plan their visit to the newly designated Alabama Black Belt National Heritage Area?

Her answer, obviously, was yes.

“That's what the Heritage Area brings,” said Jones, UWA’s assistant provost and vice president of the Division of Economic and Workforce Development. “It encourages people to get on the ground and come and visit us. It provides visitors with authentic experiences within the regions they are traveling.”

Biden’s signature on Jan. 5 was a joyous culmination of a 16-year effort to bring national attention and government funding for tourism and historic preservation to the Black Belt. Since 2007, Jones and her UWA colleagues have partnered with state legislators, members of Congress and a consortium of interested groups to advocate on behalf of some of Alabama’s most culturally diverse and historic counties, hoping they would become a nationally recognized heritage area. UWA’s role has never strayed far from that effort’s center.

BREAKING: My legislation designating Alabama’s Black Belt as a National Heritage Area has passed the House and Senate and is on its way to @POTUS’ desk to be signed into law!! ✨

“This designation is indeed a long-awaited and significant achievement for the Black Belt, and also for the University team that has worked diligently toward this for nearly 20 years,” said UWA President Ken Tucker. “Dr. Jones has led this initiative for UWA through the Division of Economic and Workforce Development even before the division was formally established, working very closely with state and federal agencies and constituencies whose partnerships are absolutely invaluable. This designation is the epitome of the collaborative spirit that exists at UWA, especially in economic and workforce development, and we are eager to embark on this next chapter for the Black Belt Region.”

The Black Belt joins the Muscle Shoals National Heritage Area as the only designated heritage locations in Alabama. As the Black Belt heritage area’s local coordinating entity, UWA’s Center for the Study of the Black Belt will tackle the creation of a strategic management plan in conjunction with the National Park Service, which oversees the heritage area program.

“One of the things that we've been really adamant about,” Jones said, “is that it is not just a single moment in time, but this is our opportunity with this designation to really look back but also look forward.”

With its campus in Livingston and its economic-development tentacles embedded in the region, UWA is uniquely qualified for its leading role within the national heritage area’s management, Jones said. The university’s Division of Economic and Workforce Development is a leading player in the Black Belt’s westernmost counties, and its impact on higher education statewide and K-12 instruction in Sumter County, through University Charter School on the UWA campus, is significant.

“I'm always amazed when we have individuals who come to the region and they are simply amazed by the interaction with the people and the warmth they find."

That’s important, Jones said, considering the years-long effort that went into outlining the national significance for a proposed Alabama Black Belt National Heritage Area. The effort’s genesis traced back to the administration of former Alabama Gov. Bob Riley, which led to a tourism consultant in the mid-2000s suggesting that the Black Belt seek designation as a National Heritage Area. A feasibility study commissioned by UWA and its partners (finished in 2009, updated in 2016) proved instrumental. A 150-member task force from 19 Black Belt counties helped UWA and its partners gain a better understanding of the region and listen to residents’ voices on matters they best understood -- what was valuable in the Black Belt, what was worth sharing to tourists, what Black Belt regions should be included in the proposed heritage area, what lessons the Black Belt’s history and cultural significance could provide to those unfamiliar with the region.

Chief among those questions was the Black Belt name.

“There were deep discussions at the beginning: are we going to keep that? Is that going to be our name?” Jones said. “Because that's part of what you have to go through as part of the process. We did a very large survey, both outside and inside.” It wasn’t unusual, she said, for those unfamiliar with the area to wonder if the Black Belt phrase referenced karate, not a historic Southern region.

Jones remembers those first conversations about the possibility of earning National Heritage Area designation. “What would that mean? How do we begin to do that?” she recalls, noting that National Park Service recommendations suggest a grass-roots effort instead of an informal federal government decree. That’s when the movement blossomed.

“We literally built a coalition, a group of interested people,” Jones said. The governor’s office had defined the Black Belt as 12 core counties, but the coalition opened that up for discussion. “We began to really look and ask organizations, how do you define Black Belt?” she said. “What does that actually mean?”

The result: 19 counties are included in the Alabama Black Belt National Heritage Act, stretching from the Alabama-Mississippi state line, past the state Capitol in Montgomery and into Bullock and Macon counties to the east. That geographic reach allows the heritage act’s tourism and educational opportunities to include not only the diverse ecology of the region, but also the historic lessons of the Native American tribes that lived in Alabama, the ensuing struggles and successes of the civil rights movement, and the region’s contributions to music, arts, crafts and storytelling.

“For us, it creates a sense of community pride, too,” Jones said. “There's a sense of regionalism that helps our small rural communities leverage their marketing dollars and their activities in a more focused way.” UWA students will benefit from the Black Belt National Heritage Act through programs that involve them in the region’s communities and introduce them to the university’s belief in regional teamwork. Opportunities for experiential learning, particularly through internships, and research projects for UWA faculty should follow, she said.

“I'm always amazed when we have individuals who come to the region and they are simply amazed by the interaction with the people and the warmth they find,” Jones said. “We're not denying that there are problems. But that's part of what heritage areas can do is offer opportunities for very deep discussions. That's one of the things we’ve said in our narrative, that there is a powerful story we have to tell.”