Alabama Women's Hall of Fame will move to UWA this year 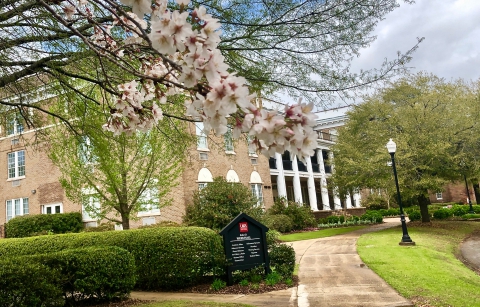 UWA's Webb Hall will become the new home of the Alabama Women's Hall of Fame.

Relocation may increase tourism, visitors for the university and city of Livingston

Dr. Valerie Burnes’ goal isn’t merely to house the Alabama Women’s Hall of Fame and its plaques at the University of West Alabama. She envisions something ultimately grand that celebrates not only the enshrinees’ lives but also introduces the university to a wider audience.

“I want to have some of the items that make it more personal than just the plaque,” said Burnes, an associate professor of history at UWA and the hall’s executive secretary. “I just want to give some things that people can visually relate to more.”

Since its birth in 1970, the Hall of Fame has resided at Judson College in Marion. Judson’s closure in 2021 forced the Hall of Fame’s Board of Directors, under direction from the Alabama Legislature, to select a new location for lawmakers to consider during their spring session in Montgomery.

A bipartisan group of 16 women state representatives co-sponsored  House Bill 100 this spring. Gov. Kay Ivey signed Act 2022-54 during the Hall of Fame’s induction ceremony at UWA on March 3, paving the way for the hall’s permanent move to Livingston this summer.

Burnes expects the Hall of Fame to be open in Webb Hall when the fall semester begins in August. The Alabama Department of Archives and History in Montgomery is holding the plaques until they can be moved to Livingston.

Inductees are selected by unanimous vote of the Hall of Fame’s Board of Directors. UWA will not determine the board’s membership or the women it enshrines. Nevertheless, the relocation serves as a worthwhile addition to the UWA campus and a stable and expanded home for the Hall of Fame, Burnes said.

“It's going to get UWA on people’s radars for various reasons because of its location in the state,” she said. “This is a chance to make these women known and to let people know that you can make a huge difference just by what you do in your daily life, that they can be an inspiration for people.”

The state Legislature’s bill encouraged the Hall of Fame not only to house the plaques, but also to feature “other memorabilia relating to women of achievement.” On that, Burnes is already one step ahead.

Spurred by her long-time association with the Hall of Fame and Judson, Burnes owns a collection of books and other materials related to the inductees. Those items may initially be used to enhance the hall for visitors this fall.

“It's going to get UWA on people’s radars for various reasons because of its location in the state. This is a chance to make these women known and to let people know that you can make a huge difference just by what you do in your daily life, that they can be an inspiration for people.”

To augment those items, she plans to contact people who nominated previous inductees and ask if they have items they’d like to donate, even if only temporarily. “So, artwork they've done, books they've written, personal effects, a robe a judge wore, something like that. I want to have some of the items that make it more personal than just the plaque,” she said.

Hall of Fame signage in west Alabama will be erected to advertise the relocation from Marion, Burnes said. A redesign of the Hall of Fame’s website and printed flyers that target travelers along Interstate 20 and state roads are also planned.

The Hall of Fame in Webb Hall will be open to the public during the university’s normal business hours, Burnes said. UWA will also continue to host its annual induction ceremony.

“With our proximity to the interstate, I think we're going to get a lot of people into Livingston and on campus who might not have even realized that the University of West Alabama was here,” she said. “Even if it's 15 or 20 people a month who stop off the interstate, they wouldn't have been here otherwise.”

In March, the Hall of Fame honored its latest inductees -- renowned gospel singer Vestal Goodman and Allison Wetherbee, who was born without arms or legs, became the Alabama March of Dimes Child of the Year at age 4 and worked as the public relations director at Alabama’s Special Camp for Children and Adults at Lake Martin.

“So many of them did remarkable things just living their everyday lives, but they've made so many other people's lives better,” Burnes said. “They've enriched their lives through art or through entertainment or through social work or nursing or education or advances in the law or giving women the right to vote. They've done so much, and history as a whole doesn't really get taught like it should.”