UWA has grand plans for its new Veterans Success Center 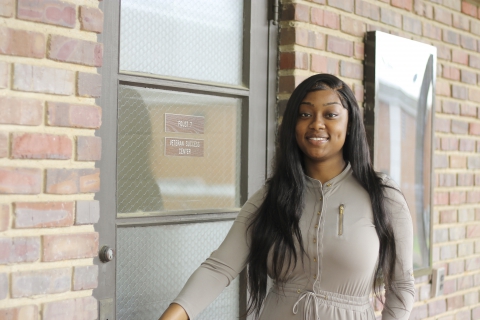 Creating additional assistance for student veterans is vital on campus

In the Army National Guard, Breonsya White is an aviation operations specialist preparing for her first overseas deployment. At the University of West Alabama, she is a junior majoring in math education with aspirations of becoming a principal or professor.

Later this year her unit will ship out to Kosovo, where she’ll work in flight operations. White, a Montgomery native who enlisted in the National Guard when she was 17, knows her role. “I basically keep track of the aircraft when they come in, when they come out,” she said.

That intersection of military service and higher education rests at the heart of UWA’s creation of its Veterans Affairs Success Center. Located in Foust Hall, the embryonic center is envisioned as a one-stop shop for student veterans whose needs, both academic and administrative, can differ from those of non-military students.

Brenda Jones, the center’s coordinator, dreams of a space that would double as a lounge -- coffee, couches, camaraderie -- and an office that helps student veterans coordinate logistical issues such as certification of federal and state benefits. The center’s location, alongside UWA’s Counseling Center, could boost its ability to coordinate counseling sessions for student veterans who need assistance.

Jones wants the center open by the beginning of the fall semester, but  admits that becoming fully operational will take time. Furniture, appliances, equipment and further organization are on her wish list.

“We need a space for students to come to be able to take care of some printing, have a cup of coffee, speak to me, get their (veterans) benefits certified, and (help) if they need to speak to anybody else on campus,” she said. “I'm kind of like ground zero or an air traffic controller, so that they're not lost in the process.”

Jones, formerly UWA’s transfer admissions counselor, chuckles when acknowledging her lack of military background. She didn’t serve or grow up as an Army brat relocating from post to post. Her interest in becoming the center’s first coordinator -- its creator -- was borne from a desire to better use her professional skills and increase the ways she helps the university, she said.

“I'm kind of like ground zero or an air traffic controller, so that (student veterans are) not lost in the process.”

Shortly after moving into her Foust Hall office, Jones recounted a conversation she had with Dr. Melissa Haab, UWA’s vice president of student affairs and enrollment management, who posed a question.

“Well, if you think about it, what are veterans and veteran dependents?” Haab said.

Jones wasn’t sure how to answer.

“They are not a niche market but a focus group,” Haab said. “They're a specialized group of students that have special needs, specialized backgrounds, and they're coming to college through a different lens than your average college student.”

In short order, Jones has organized an array of short- and long-term plans for how the center can assist UWA student veterans and add to the university’s efforts to increase enrollment. One of the improvements on her agenda is increasing the university’s military footprint and its reach within the region’s military communities.

More than 377,000 veterans live in Alabama, according to data from the National Center for Veterans Analysis and Statistics. More than a quarter of Alabama veterans -- 26.2 percent -- hold bachelor’s degrees or higher, the U.S. Census Bureau reports. Nevertheless, the number of veterans in UWA’s student population isn’t as sizeable as Jones would like.

By increasing its military footprint, she said, UWA would acknowledge the importance of connecting its campus and academic options to those students. Just as vital is making student veterans aware of what services are available to them at UWA, including honor societies, support groups and campus events that augment the center’s future plans.

“All of those things increase awareness in the community of what you're trying to do,” Jones said.

For White, 22, the flight-ops specialist and math education major, the birth of a veterans center is a welcomed addition to the UWA campus. Serving in the military while pursuing a university degree can test students’ time-management skills and academic commitment, and having a space designed to assist veterans can make a difference.