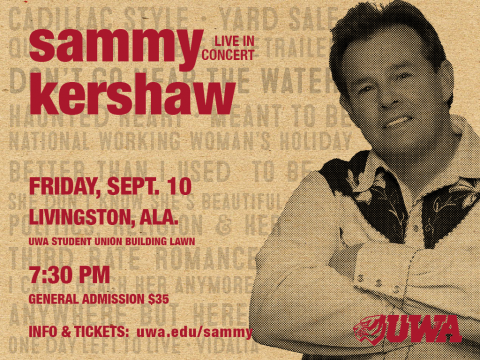 The University of West Alabama has announced a fall concert on campus with featuring Sammy Kershaw on Friday, Sept. 10. A limited number of general admission tickets are available for $35 and can be purchased online. Proceeds from the concert benefit renovations at UWA’s Tiger Stadium.

Kershaw is a multi-platinum-selling recording artist with six gold and three platinum albums that have sold more than five million records and more than 70 million combined songs. He has more than 25 top 40 singles, including 11 top 10 singles, and two number one hits with “She Don’t Know She’s Beautiful” and “Love of My Life.”

He is a member of the Louisiana Music Hall of Fame, with a unique sound and music that people connect with on a sincere and authentic level.

Ticket holders are encouraged to bring a lawn chair or blanket for seating. The concert will be held outdoors, rain or shine. Additional event information, including tickets, artist bio, parking and policies, is available at www.uwa.edu/sammy.