Fungi for the fight against famine 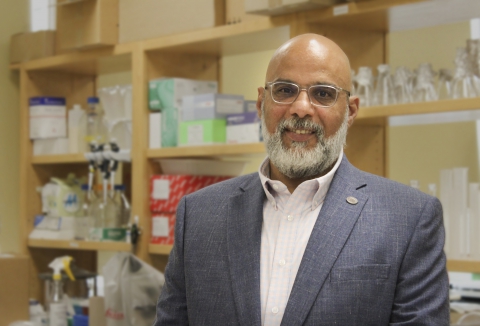 Famine didn’t mar the childhood of Dr. Mustafa Morsy, a professor of biology at the University of West Alabama. Food for his family in Alexandria, Egypt, was readily available. “I was always thankful as middle-class people growing up that my dad was able to feed us,” he said.

Nonetheless, there is an existential connection between Morsy’s childhood memories of famines in other countries and his ground-breaking research at UWA into sustainable food production and stress-tolerant crops.

Named earlier this year as the recipient of a Fulbright U.S. Scholar Program award, Morsy will leave in January for a nine-month research effort at the United Arab Emirates University. Once there, he will continue his quest to increase crop production to combat the rise in global population and effects of climate change.

“I can actually remember the famines in east Africa to drought and a lack of food,” Morsy said. “I saw lots of pictures as a young boy of people dying from hunger. I can't imagine going hungry until you die. It’s the worst thing that can ever happen to anybody.”

Morsy is the second UWA faculty member to receive a Fulbright award and the first since the 2001-02 academic year. Connie Marine, UWA’s international programs coordinator, is a Fulbright alumni and has participated in two of its initiatives.

The U.S. government considers the Fulbright program, which is celebrating its 75th anniversary, as its most vital cultural exchange effort. Fulbright’s alumni list is decorated with 60 Nobel Prize laureates, 88 Pulitzer Prize winners and 39 former heads of state. Overall, more than 400,000 people from more than 160 nations have studied and taught under the Fulbright’s mission.

Morsy’s scientific passion revolves around the study of fungal symbionts in plants that can be used to increase plant growth, fruit yields and tolerance of specific agricultural stressors. His research often includes studies of wheat, corn, tomatoes, strawberries and soybeans, he said.

Free of scientific jargon, Morsy describes his research in a simplistic way. “I look for the microbes that are present in healthy, wild plants, and the beneficial ones we use to make crops more healthy,” he said. “More healthy plants means more production. Simply, we harness the power of nature to improve crop health and quality, which minimizes the need to use chemicals that may be harmful to the environment and human health.”

The beneficial microbes can be divided largely into two major categories, Morsy said: one is bacterial and one is fungal. Morsy centers his research on the latter.

At UAE University, Morsy will link with a collaborator who has been researching bacterial microbes in plants for more than 25 years. That the UWA professor’s Fulbright-sponsored research is taking him to that Arab nation shouldn’t be a surprise, he said.

“UAE as a country has been one of the most advanced countries for sustainable agricultural systems.” Morsy said, “Although they are small, the research and development they came up with in the last few years is unbelievable.”

In Alabama, Morsy’s research has already led to the development of a fungal-based biological liquid fertilizer that was distributed at no cost to farmers and landowners in and around Sumter County during the most recent growing season. The goal, Morsy said, is to eventually develop the product for commercial sales that could further mankind’s efforts to combat famines and food insecurity.

Morsy, who has taught at UWA since 2011 and is chair and co-founder of the UWA Research Symposium, is proud of the positive impact his research -- and his life story -- can have on his students.

“My dad and mom told us, ‘Look, education is what can make a difference in your life,’ and so I believed in that,” he said. “Ninety percent of the students around here are like me, first-generation college students who came from a humble background. And I tell them this: ‘If I can make it, I think they can.’”