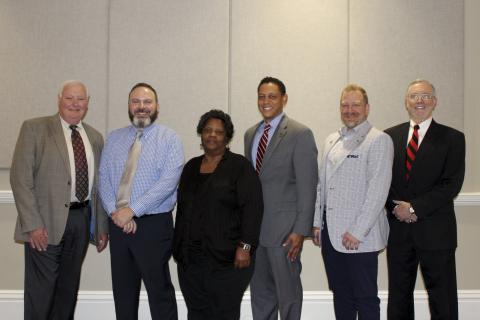 The University of West Alabama presented four prestigious awards to members of its faculty and staff during the Dec. 2 Board of Trustees quarterly meeting at Bell Conference Center. The Loraine McIlwain Bell Trustee Awards and the Nellie Rose McCrory Service Excellence Award were presented to distinguished employees.

Candidates for the awards are nominated by the University community, and the winner in each category is selected by a committee of peers.

The McIlwain Bell Trustee Awards are presented annually in three categories: support staff, professional staff, and faculty.  Each comes with a plaque and a check for $1,000.

Willie B. Raymond, a longtime member of UWA’s housekeeping staff, received the 2020 Support Staff Excellence Award. Raymond came to UWA in October of 1995, and she her peers say that she has made a positive impact on countless lives over the last 24 years.

UWA Provost Tim Edwards explained that one of Raymond’s letters of nomination tell of her exceptional character and the many ways she goes above and beyond to show her care for fellow employees and their families “as a loving aunt cares for her favorite niece or nephew.”

“For faculty, she remembers birthdays,” the letter read. “She checks on us if she knows that we or someone in our family has been ill. She asks about our children. She asks students about their ‘lessons’ and encourages them.” Raymond celebrates the end of students’ journey with them and has attended every convocation ceremony since she began in housekeeping for UWA’s Ira D. Pruitt Division of Nursing, cheering for them throughout their college career.

Will Atkinson, assistant to the vice president of student affairs, received the 2020 McIlwain Bell Professional Staff Excellence Award. Atkinson has been at UWA for 13 years and in his time on campus has become a go-to for students needing guidance and assistance.

Atkinson joined the UWA staff in 2006 as assistant softball coach and less than a year later became head softball coach. He led the team for the next nine years, with much success on the diamond through his approach to a positive effort and attitude. In 2016, he transferred to a professional staff position in Student Affairs, where he helps coordinate daily operations of the many branches of the office.

“Will’s interaction with former players and current students, and his concern and compassion for students all exceed expectations, and he is an inspiration even to others who have been at the University many years,” his nomination letter reads. “Will takes pride in his work and this campus, and he has made the division he works in better through his participation.”

The 2020 McIlwain Bell Trustee Professor Award was presented to Dr. Rob Riser, professor of history in the College of Liberal Arts. He came to UWA in the fall of 2005 as a lecturer and has progressed through the ranks of assistant professor, associate professor, and now professor. He served as chairperson of the Department of History and Social Sciences for nearly six years and for three years served an additional role as a transcript evaluator for UWA International Programs.

Riser is known by his colleagues as a stellar instructor, fierce student advocate, and a valued and generous colleague. His nomination letter from a colleague tells of his compassion and commitment to students.

“Our students love his conversational approach to sharing information,” the letter reads. “Dr. Riser does not lecture so much as create relatable, historical narratives, a style that imparts information without being pedantic or authoritative, and this is appealing to young audiences. I have heard him express empathy for the financial sacrifices and cultural risks that American young people from rural areas undertake when they commit to higher education. He treats our young adults with respect without patronizing them, and they respect him.”

Dr. LaJuan Hutchinson, assistant professor of physical education, is the recipient of the 2020 Nellie Rose McCrory Service Excellence Award. The McCrory Service Award recognizes commitment to the University community through scholarship and service. Hutchinson has been at UWA for more than eight years, developing an impressive record of service to the community and the University.

Hutchinson joined the University faculty in 2011, and he teaches undergraduate and graduate sports management courses within the Physical Education and Athletic Training department and the College of Business and Technology. He has served as president of faculty senate and a host of committees and councils on campus.

His nomination letter highlights Hutchinson’s achievements that all directly benefit student learning at UWA, including updating and enhancing sport management curriculum, internship programs, a volunteer program for students to work at the local ESPN radio affiliate, “an awe-inspiring course load,” and the impressive number of students he advises in a career-based approach.

The Loraine McIlwain Bell Trustee Awards were established in 1996 through an endowment by the late Mrs. Bell's daughter and son-in-law, Mr. and Mrs. L.G. Cunningham.  UWA’s Bell Conference Center is also named in honor of Mrs. Bell and her husband.

The McCrory service award is made possible by an endowment by the late Miss McCrory, who earned the B.S. in English and M.Ed. in Secondary Education from UWA and the doctorate from the University of Alabama.