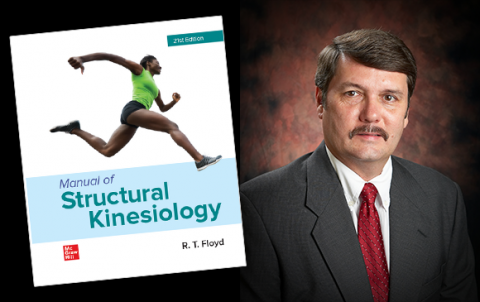 University of West Alabama professor and athletic trainer Dr. R.T. Floyd has just published a new edition of a textbook that has come to serve as a cornerstone of athletic training, physical education and health science curricula across the nation.

Floyd’s Manual of Structural Kinesiology, now in its 21st edition, is an exploration of the human body and its moving parts. The manual identifies specific muscles and muscle groups and identifies exercises for strengthening and developing those muscles. The book is published by McGraw Hill Education.

A 2013 inductee of the National Athletic Trainers’ Association Hall of Fame, Floyd has become widely known for his contributions to the field of athletic training and sports medicine, having offered guidance, instruction and mentoring to countless others throughout the profession.

The instruction in the manual reflects his teaching style: information presented in an accessible format with logical and concise illustrations and descriptions. Throughout the manual, photography directed by Floyd demonstrates the function of bones, muscles and joints related to human movement that students in athletic training, sports medicine and the health sciences must understand and be able to apply to their patients, clients and students.

The textbook’s previous 20 editions have evolved over the years, with this 21st edition offering not different information, but new, clearer and more thorough detail. The illustrations and photos are now in full color with a hard cover format for the first time.

“The editing process that resulted in this 21st edition included adding additional terms, content and concepts related to body position, open versus close packed positions, concave-convex rule and lever terminology. The labeling and captions in many figures have been enhanced with further details,” Floyd explained. “For instance, chapters four through 11 now have a table detailing how to locate and palpate the key bony and joint landmarks.”

The expertise behind such thorough offerings can come only from a long and decorated career such as Floyd has enjoyed. Some consider his name synonymous with the field of athletic training and sports medicine, and some say he wrote the book. This manual, first published in 1948 with authorship assumed by Floyd in 1992, proves that.

“Most advances in kinesiology and exercise science continue to result from a better understanding of the body and how it functions,” Floyd said. “I believe that an individual in this field can never learn enough about the structure and function of the human body and that this is typically best learned through practical application.”

Floyd credits his students and colleagues at UWA in the book’s preface for their suggestions, advice, and input.

Floyd joined the UWA faculty in June 1980 and today serves as director of the Athletic Training and Sports Medicine Center at UWA. He is program director for the CAATE accredited athletic training education program and is chair and professor in the School of Health Science and Human Performance.

Floyd served as the Head Athletic Trainer for the Blue-Gray All-Star Classic in Montgomery from 1977 through 2001, after spending two years on the annual event’s athletic training staff. He is a 1974 graduate of Lowndes Academy, where he worked as an all-sports athletic trainer for four years, before earning a B.S. and M.A.T. in physical education from UWA in 1980 and 1982, as well as an Ed.D. in Human Performance Studies from the University of Alabama in 1995.

Floyd was named to the UWA Athletic Hall of Fame in 2001. He received the District IX Award for Outstanding Contribution to the field of Athletic Training by SEATA in 1990 and the Award of Merit in 2001 before being inducted into the SEATA Hall of Fame in 2008.

In 2004, Floyd was inducted into the Alabama Athletic Trainers’ Association Hall of Fame. In 2007, he received the NATA Sayers "Bud" Miller Distinguished Educator Award. The NATA Foundation recognized him with the Volunteer Service Award in 2011 and the Lifetime Contribution Award in 2018. He was named to Who’s Who Among America’s Teachers in 1996, 2000, 2004, and 2005.

To learn more about the Athletic Training and Sports Medicine Center at UWA or the academic program, contact Dr. R.T. Floyd by email at rtf@uwa.edu or by phone at 205-652-3714.