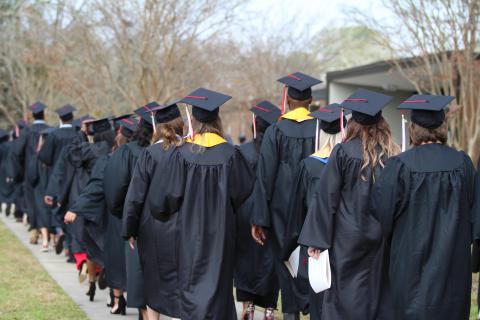 Nearly 1,000 students in the graduating class represent some 26 states across the U.S. and abroad

The University of West Alabama held fall commencement exercises on Saturday, Dec. 14, with President Ken Tucker conferring undergraduate, master, and education specialist degrees to students of the colleges of business, education, liberal arts, and natural sciences and mathematics, , and to the school of graduate studies. Nearly 1,000 students in the graduating class represent some 26 states across the U.S. and abroad.

Micah McGaha of Milton, Florida, received the Ralph M. Lyon Award, which is given to the graduating senior with the highest grade point average. McGaha received a bachelor of business administration.

For nearly 185 years, the University of West Alabama has served the west central Alabama area and beyond through educational opportunity, academic research and public outreach. Founded in February 1835 as Livingston Female Academy, the school is currently home to students from around the world.