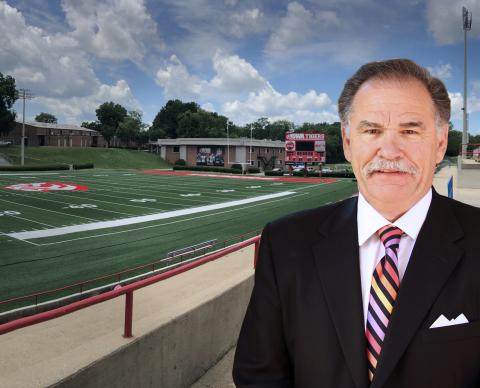 The University of West Alabama Board of Trustees has approved the naming of the athletic field on campus in honor of alumnus and trustee Terry J. Bunn of Tuscaloosa. The naming comes as the athletic field and Tiger Stadium undergo major renovations and upgrades planned for the coming months. The most visible upgrade thus far is the new synthetic turf.

Bunn is a longtime supporter of UWA Athletics and has taken lead roles over the years to help build support for athletic programs. His long and distinguished service as a member of the board has included both vice-president and president of the board as well as chair positions for its various committees, including athletics.

In recognition of Bunn’s commitment to helping the university provide an exceptional education and various other opportunities to students, UWA will name the athletic field “Terry Bunn Field.” The field is home to UWA Football and both men’s and women’s soccer. The new turf, like the previous, is marked for both sports and bears current UWA tiger branding.

“This is one of the most exciting naming opportunities in recent history at UWA,” said President Ken Tucker. “Tiger Stadium, with this attractive athletic field, brings together thousands of students, fans, and families throughout the year. In much the same way, the devotion and support that Mr. Bunn and his family have shown to the university has resulted in countless opportunities for growth, shared achievements, and celebration. We are excited to welcome the Tiger family to the stadium and dedicate Terry Bunn Field very soon.”

Bunn, a 1976 graduate of UWA (then Livingston University), earned a bachelor of science in business administration and economics and has come to be regarded as one of the most successful businessmen in the state of Alabama. Throughout his success, he has helped pave the way for generations of students at UWA. He has long supported the UWA Foundation and UWA’s National Alumni Association and has received the NAA’s Alumni Loyalty Award. He was also inducted into the prestigious Society of the Golden Key for service that has brought distinction upon his alma mater.

Throughout his career, Bunn has maintained close ties to the University that gave him the lifetime friendships and values that he holds so dear. He has often said that UWA has maintained the congeniality that many other institutions have lost over the years, and he supports the University’s efforts in several ways to help ensure that this is maintained.

UWA’s stadium, with the athletic field as its focal point, is home to a broad range of memories and milestones for UWA students and fans. Prospective students stop by for a snapshot during campus tours then take graduation photos in the same spot.

“Between those two times are countless other experiences at Tiger Stadium where, no matter our discipline, role, classification, or memberships, we are all Tigers,” said UWA Athletic Director Bobby Wallace. “From this renovation we expect space, efficiency, aesthetics, safety, sustainability, and function, all wrapped into a plan that will enhance the gameday environment while also meeting the daily needs of a growing campus.”

Renovations and upgrades include a stadium pressbox and suite expansion featuring an academic center, skyboxes, upgraded chairback seating, and a new Tiger Club room. The general admission area will receive upgrades, with steel Perma-Plank® seating added to the area for comfort and style. Plans for the projects have been underway for quite some time, the first work beginning earlier this year with the installation of the new turf. The university has a development campaign underway for funding the initiative.

To know more about Tiger Stadium renovations and UWA Athletics, contact the office of the athletic director at 205-652-3652.