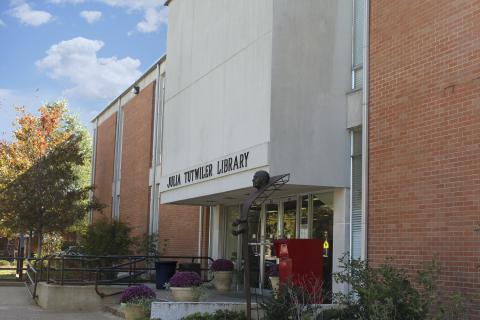 The University of West Alabama’s Julia Tutwiler Library will host a book talk by author Dr. G. Ward Hubbs on Sunday, Oct. 27, from 2 until 4 p.m. The public is invited to attend this free event. A wine and cheese reception will follow the reading, and Hubbs will sign copies of his works.

Hubbs will share excerpts from Searching for Freedom after the Civil War: Klansman, Carpetbagger, Scalawag, and Freedman, in which he uses a stark and iconic political cartoon to illuminate postwar conflicts of the meaning of freedom in the American South. Using a dynamic and unprecedented approach that interprets the same events through four points of view, Hubbs artfully unpacks numerous layers of meaning behind this brutal two-dimensional image.

The four men associated with the cartoon—Ryland Randolph, Rev. Arad S. Lakin, Dr. Noah B. Cloud, and Shandy Jones—were archetypes of those who were seeking to rebuild a South shattered by war. Hubbs explores these broad archetypes but also delves deeply into the four men’s life stories, writings, speeches, and decisions in order to recreate each one’s complex worldview and quest to live freely. Their lives, but especially their four very different understandings of freedom, help to explain many of the conflicts of the 1860s. The result is an intellectual tour de force.

Hubbs has received high acclaim this year for Tuscaloosa: 200 Years in the Making  (University of Alabama Press, 2019), which, in both its subject and its approach, is an account unlike any other of a city unlike any other. Hubbs has written a lively and enlightening bicentennial history of Tuscaloosa that is by turns enthralling, dramatic, disturbing, and uplifting. Far from a traditional chronicle listing one event after another, the narrative focuses instead on six key turning points that dramatically altered the fabric of the city over the past two centuries.

With an impressive amount of research collected in this accessibly written history of the city and its evolution, Tuscaloosa  is a versatile history that will be of interest to a general readership, for scholars to use as a starting point for further research, and for city and county school students to better understand their home locale. The work is published by The University of Alabama Press.

Hubbs is a featured author on Read Alabama 200, a list of authors of recently published books offering new information and insight in the Alabama history and culture. Read Alabama 200 is part of ALABAMA 200, a three-year celebration of the people, places, and events that form the state’s rich history, guided and supported by the 12-member Alabama Bicentennial Commission chaired by Senator Arthur Orr of Decatur.

Hubbs is professor emeritus at Birmingham-Southern College and archivist for the north Alabama Methodists. He lives with his wife, Pat, in the family home in Tuscaloosa. He is the editor of Rowdy Tales from Early Alabama: The Humor of John Gorman Barr and author of Guarding Greensboro: A Confederate Company in the Making of a Southern Community.

For more information on the author’s visit, contact Anna Bedsole at UWA’s Julia Tutwiler Library at 205-652-3842 or abedsole@uwa.edu.