UWA inducts two into Society of the Golden Key 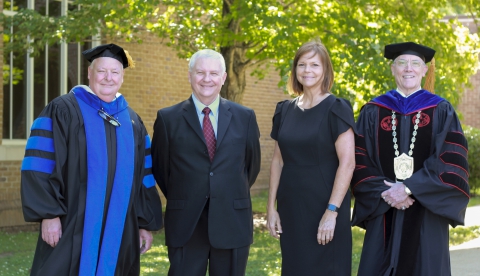 A distinguished educator and administrator who has taught in three states and a renowned retirement planner and training instructor have been inducted into the University of West Alabama’s Society of the Golden Key, the highest award given to its graduates and faculty members.

The holder of three degrees in elementary education from UWA (bachelors in 1976; master’s in 1978; post-graduate certification in 1981), Eastman earned her doctorate in educational administration from Nova Southeastern University in Fort Lauderdale, Florida, in 2001. She also holds master’s degree certifications from Alabama State University in Montgomery and Spring Hill College in Mobile.

After graduating from UWA, Eastman worked at a variety of educational institutions for 41 years in Alabama, Florida and Georgia. Starting as an elementary teacher and then as a media specialist, Eastman began specializing in technology integration and grant writing in K-12 schools.

That career path led to the Alabama Department of Education naming her in 2006 as its library media specialist and technology coordinator. Librarian and bookstore manager roles at Virginia College locations in Pensacola, Florida, and Macon, Georgia, soon followed.

Before he embarked on his 35-year career with the Regions Financial Corporation Wealth Management Department, Poole graduated with a bachelor’s degree in business administration in 1976 from UWA, where he served in the Student Government Association and became a member of Who’s Who in American Colleges and Universities. He also holds a bachelor’s degree in personal accountancy from Mississippi State University and successfully completed academic programs at the University of Alabama at Birmingham, the Cannon Financial Institute in Athens, Georgia, and Chicago’s Ed Slott and Company, which offers professional training in IRA planning.

After beginning his career in Mississippi as a staff accountant and bank auditor and trust operations manager, Poole returned to Alabama and joined Regions Financial Corporation in 1987 as a trust tax officer. Working in Birmingham, Montgomery and Huntsville, Poole’s role expanded until he became the Regions Wealth Management Department’s trust auditor and compliance officer in 2003. Since 2012 he’s served as the department’s IRA subject matter expert, with emphasis on legislation, federal laws and estate planning.