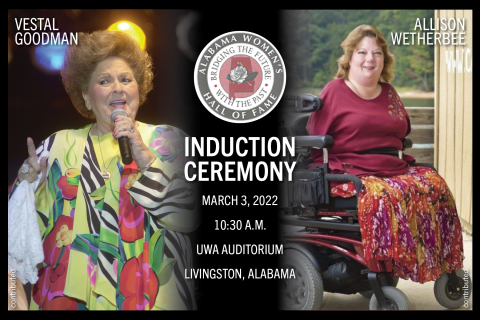 Gov. Ivey will deliver one of the induction speeches

Two women with inspirational stories will join a hallowed group that includes Coretta Scott King, Tallulah Bankhead, Julia Tutwiler and Rosa Parks when they are inducted into the Alabama Women’s Hall of Fame at the University of West Alabama.

The ceremony, which is free and open to the public, will be held March 3 at 10:30 a.m. at the UWA Auditorium in the Math and Science Building. A luncheon, which requires a reserved ticket, will follow.

The Hall of Fame has resided at Judson College in Marion since it began five decades ago. Judson College closed last year, and an announcement on the hall’s new site is expected soon.

“(The hall) brings attention to women who have done amazing things,” said Dr. Valerie Burnes, an assistant professor of history at UWA and the Hall of Fame’s acting executive secretary. “Sometimes (they were) just living their daily lives, but they've done things to make the lives of other Alabamians better, maybe through social work or through education.”

Wetherbee (1970-2016), was born in Selma without arms or legs as a result of quadrilateral tetra-amelia syndrome, a rare genetic disorder. Raised in Camden, Wetherbee became the Alabama March of Dimes Child of the Year at age 4 and the state’s Easter Seals Child of the Year as a 10-year-old. She graduated from Wilcox Academy and earned a master’s degree in mental health counseling from Auburn University at Montgomery.

After working as a mental health counselor in Russellville, Wetherbee in 2007 became the public relations director at Alabama’s Special Camp for Children and Adults (Camp ASCCA) at Lake Martin, where she had been both a camper and a public-relations assistant. Speaking engagements she gave across the state introduced Wetherbee and her story to a generation of Alabamians.

Wetherbee published her autobiography, “I Was Born This Way,” in 2009.

Goodman (1949-2003), born in Fyffe at the beginning of the Great Depression and often described as the “Queen of Southern Gospel Music” by music journalists, was a founding member of the Happy Goodman Family that became the first gospel group to win a Grammy Award. Both Goodman and her husband, Howard Goodman, were preachers.

Initially wanting to sing operas, Goodman followed her faith and became the recognizable voice in her family’s gospel group. The Happy Goodman Family recorded 15 No. 1 songs and received multiple Dove Awards from the Gospel Music Association. Goodman received the GMA’s Female Vocalist of the Year award in 1969 and recorded her first solo album two years later. Her autobiography, “Vestal! ‘Lord I Wouldn’t Take Nothin’ For My Journey Now,’” was published in 1999.

Those interested in buying a reserved ticket to the Hall of Fame’s luncheon should email Burnes at vburnes@uwa.edu. Tickets are $50.

The Alabama Women’s Hall of Fame was established in 1970 to honor the lives of outstanding women from the state of Alabama. Inductees must be deceased for two years and be from or affiliated with Alabama. Women to be inducted are selected by unanimous vote of the board of directors of the AWHF. The board is from a cross section of the state and represents broad areas of interest. To nominate a woman for this honor, use the printable FORM and email to: alabamaWHF@gmail.com. Neither membership nor honors of the AWHF are determined by the University.