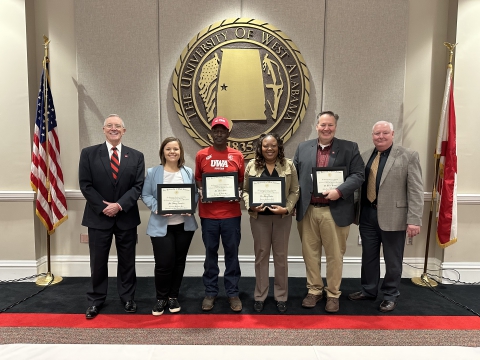 The University of West Alabama presented four prestigious awards to members of its faculty and staff during the Dec. 12 Board of Trustees quarterly meeting at Bell Conference Center. The Loraine McIlwain Bell Trustee Awards and the Nellie Rose McCrory Service Excellence Award were presented to distinguished employees.

Candidates for the awards are nominated by the University community, and the winner in each category is selected by a committee of peers.

The McIlwain Bell Trustee Awards are presented annually in three categories: support staff, professional staff, and faculty.  Each comes with a plaque and a check for $1,000.

Willie Bell, a longtime member of UWA’s Physical Plant staff, received the 2023 Support Staff Excellence Award. Bell is a member of the University’s groundskeeping staff and works with groundskeeping and maintenance and provides support at countless University events.

UWA Provost Tim Edwards explained that Bell’s letter of nomination tells of his attention to detail and commitment to quality.

“Willie has proven to be an outstanding employee and has become the person that is called on if a job needs more care and attention to detail,” his colleague’s nomination letter reads. “He has an exemplary work ethic and is always willing to go beyond what is required, whether working after hours or during events. We actually have some on campus that ask for Willie specifically to work their events, since he has proven to be very dependable.”

His colleague’s recommendation continues, “We continue to hear from visitors that we have a beautiful campus. This is a testament of the commitment of those like Willie Bell to continue to work hard on the little things that make a big difference.”

Betsy Compton received the 2023 McIlwain Bell Professional Staff Excellence Award. She is director of strategic communications, overseeing public relations, marketing, social media, and executive communications. Compton joined the university staff in 2007 and holds a 2006 bachelor’s degree in English and journalism and a 2010 master’s degree in English, both from UWA.

“Betsy’s dedication, commitment, and performance during the challenges of the pandemic have been exemplary,” her colleague’s nomination reads. “She has played a vital part of the University’s response to COVID-19. She coordinated the University’s communication strategy, answered countless questions and complaints from faculty, staff, and students, and provided much needed guidance to the University in best practices for dealing with the organizational challenges faced by the University. Her ability to take the most complicated subject matter and condense it down to easily understandable language is an asset that is vastly underappreciated.”

Her colleague’s recommendation continues, “The University has routinely been complimented by other colleges and universities on its effective communication strategies in response to COVID-19. While this has certainly placed the entire University in a positive light, the credit for this largely rests with her.”

Dr. Mary Hanks, associate professor of nursing and chairperson of the Ira. D. Pruitt Division of Nursing, received the 2023 McIlwain Bell Trustee Professor Award. Hanks joined the University faculty in 2011, and under her leadership, the University has expanded its nurse education program to include a bachelor of science in nursing, continuing to also offer the associate of science in nursing.

Hanks holds a 1993 bachelor of science in nursing, a 2010 master of science in nursing, and a 2005 doctor of education, instructional leadership, nurse educator degree, all from the University of Alabama. Her contributions to academics at UWA extend beyond nursing education, including her leadership on the University’s new Quality Enhancement Plan, “Pro-Certified,” which is being piloted in nursing with 100 percent of its students participating in the program thanks to her guidance and encouragement.

“Dr. Hanks is at her best when she is advising and mentoring potential and current nursing students,” her colleague’s nomination letter reads. “I have had many students express to me that she is like their mother and ‘tells it like it is’ and that they feel as if she honestly wants the best for them all. She takes it upon herself to provided outstanding support to not only the nursing students but her faculty and staff as well.”

Her colleague’s recommendation continues, “Dr. Hanks exemplifies the mission of the nursing program, the University, and has positively impacted the students who have graduated under her tutelage and leadership.”

Dr. Brian Keener, professor of biology in the College of Natural Sciences and Mathematics, received the 2023 Nellie Rose McCrory Service Excellence Award. The McCrory Service Award recognizes commitment to the University community through scholarship and service. Keener came to UWA in the fall of 2003 and currently also serves in additional roles as assistant dean of the School of Graduate Studies.

Keener serves as director of the UWA Cahaba Biodiversity Center, a site that was gifted to the University by landowner William D. Hubbard, to provide research activities for faculty and students (undergraduate and graduate). The Center embodies and materializes the University’s vision for a fully immersed conservation biology program.

“Receiving [the McCrory Service Award] would be a tremendous honor for Dr. Keener as thanks for his work during the past three years regarding the development of the UWA Cahaba Biodiversity Center,” his colleague’s nomination letter reads. “For nearly a year before the UWA Foundation’s acquisition, Dr. Keener spent countless hours by phone and in-person with Mr. Hubbard.  His effort ultimately culminated in a donation of 2,153 acres of property estimated to be valued at $3 million in Bibb County, Alabama.”

The Loraine McIlwain Bell Trustee Awards were established in 1996 through an endowment by the late Mrs. Bell's daughter and son-in-law, Mr. and Mrs. L.G. Cunningham. UWA’s Bell Conference Center is also named in honor of Mrs. Bell and her husband.

The McCrory service award is made possible by an endowment by the late Miss McCrory, who earned the B.S. in English and M.Ed. in Secondary Education from UWA and the doctorate from the University of Alabama.