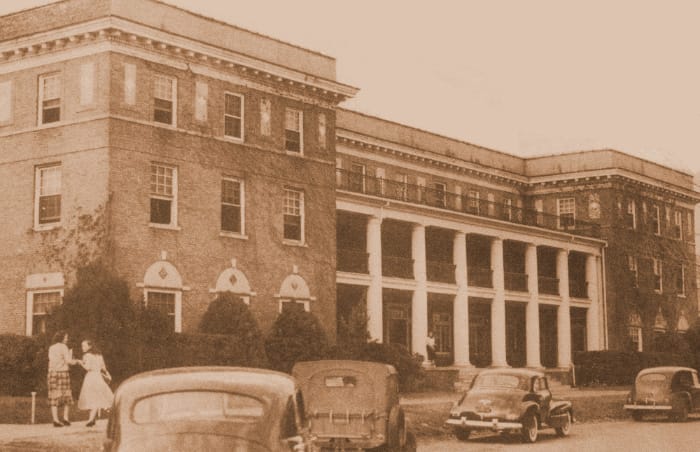 The University of West Alabama was chartered in 1835 as a church-related female academy and admitted its first students in 1839. After difficult times during the Civil War and Reconstruction periods, the school reopened in the late 1860s or early 1870s. Although it appears that a few male students were admitted following the reopening, a resolution by the Board of Trustees in 1876 excluded boys, and this policy was followed until the beginning of the 20th century.

From 1881 to 1910 the school at Livingston was under the direction of the noted educator and reformer Julia Tutwiler, who succeeded in getting a small appropriation from the State Legislature in 1883 to establish normal school training for girls at Livingston Female Academy. According to statements in the University archives, this is believed to be the first State appropriation in Alabama made exclusively for the education of women. The first normal school diplomas were granted in 1886.

Livingston Female Academy and State Normal College continued as a private institution with some State support until 1907, when the State assumed full control. It remained under its own board of trustees, however, until the Legislature created a State Board of Trustees for all the normal schools in 1911. In 1919, this board was abolished and all state normal schools were placed under the supervision of the State Board of Education. During these early years the school offered both secondary education and normal school programs for the training of teachers.

Dr. G. W. Brock succeeded Miss Tutwiler as President in 1910, and under his tenure of more than a quarter of a century, the institution continued to grow and develop. Presidents since Dr. Brock have been as follows:

In 1929 the school at Livingston became State Teachers College, Livingston, Alabama, with authority to confer the degree of Bachelor of Science. The Bachelor of Arts degree was authorized in 1947. Although the institution had begun accepting male students soon after 1900, the student body remained predominantly female through the 1950s.

In 1957 the name was again changed by an act of Legislature — this time to Livingston State College — and the following year the mission of the institution was broadened when the Graduate Division was established and the College was authorized to confer master’s degrees in the field of professional education. In 1967 an act of the Legislature created Livingston University, with its own Board of Trustees.

In 1995 the institution recognized its broader mission as a regional university serving the educational needs of all the citizens of the area by changing its name to the University of West Alabama.