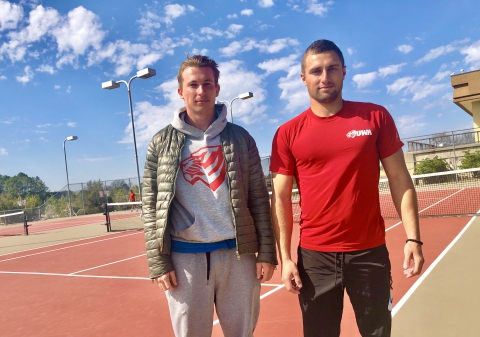 Ilia Dehodiuk, left, and Andrii Stratiienko came to UWA to play tennis for the Tigers.

Ilia Dehodiuk never stops checking his phone. Never. “Literally every minute,” he says. He checks it each morning. While walking to class. Before practice. After practice. Before bed. Next day, same thing. He has to check. He must.

It’s his obsession, his lifeline, his connection.

“I check the news because I want to make sure that my family is safe and my city is good, because you've seen those videos of the rockets launched in the cities,” he said. “It's terrible. I cannot imagine just being there and feeling what they’re feeling.”

The juxtaposition between Livingston, Alabama, and Kyiv, Ukraine, is astonishingly stark. Separating them are seven time zones, an ocean and the alternate realities of nations, continents and Russia’s invasion of its former Soviet Union neighbor.

None of that is lost on the Ukrainian-born Dehodiuk, 22, a senior sport management major at the University of West Alabama and a member of the Tigers’ tennis team.

“You know, the thing is that I don't think I quite realize what's going on yet,” he said, and then he pauses. His gaze lowers. “It's just getting to me right now because when it just started to happen, I couldn't believe it. It's just a feeling that I cannot even explain because I never felt it before. I feel that my family is in danger.”

Dehodiuk’s mother is hiding in an underground bomb shelter in Kyiv, the Ukrainian capital. His sister is living in a bunker below her apartment in Kakhovka, a port city in southern Ukraine.

“Basically, my country is in the war and I just don't know what to do with it,” he said. “I don't have anything inside. I'm just so lost. I don't have motivation to do anything. There's nothing that matters for me more than just thinking about home.”

Camaraderie, if not comfort, comes from an unlikely source. The team’s graduate assistant coach is Andrii Stratiienko, a Ukrainian who played for the Tigers, graduated in May 2020 and is working on his master’s degree at UWA.

At 24, Stratiienko is two years older than Dehodiuk but nonetheless in a similar situation, an otherwise carefree life in Alabama’s rural Black Belt far removed from his war-torn homeland in Eastern Europe.

Most of Stratiienko’s family -- his mother, aunts, cousins, grandmothers -- have remained near his hometown of Vinnytsia in west-central Ukraine. Russian forces obliterated Vinnytsia’s airport in the war’s opening phase. The likelihood of Russian airstrikes and missile attacks has forced his relatives to move into bomb shelters outside the city and away from potential military targets.

Stratiienko speaks often by phone with his mother.

His father, a Ukrainian army veteran, was recalled into the military when the war began. They occasionally exchange texts. He is busy, Stratiienko says, “doing all of the army stuff.”

“I would be more calm if they would leave the country, but it's impossible because there are queues everywhere, like to every border, it doesn't matter,” he said. “I’m really worried, I would say, because you never know what can happen because it's basically stuff flying over your head all the time.

“I talked with my friend, he was walking on the street, and it's just like a jet fighter flying above your head, and then another jet, and everyone just goes on the floor, and you don't know if it's like that.”

Though UWA’s men’s tennis team features players from myriad nations -- Sweden, France, Mexico, Germany, Finland and the United States -- the odds of Stratiienko and Dehodiuk meeting a fellow Ukrainian in Alabama are slim. Roughly 4 percent of Alabama’s population is foreign-born, according to U.S. Census Bureau data. Less than 4 percent of the state’s 175,000 foreign-born residents are from Eastern Europe; of those, less than 1 percent are from Russia or Poland, and less than 3 percent are from the remaining Eastern European nations, including Ukraine.

Their connection, in language, in culture, in concerns, is obvious. Stratiienko and Dehodiuk are fluent in Ukrainian, Russian and English; they speak in Russian, not Ukrainian, with each other. (The languages both use the Cyrillic alphabet and are spoken in Ukraine.) Tennis dominates their conversations -- or did, until Russian bombs began falling on their hometowns and concerns about their families’ welfare became impossible to keep hidden.

Ignoring the news is impossible, they say. Their phones are bloated with images of war, texts from friends, contacts with their family.

“Yeah, we talk about it all the time,” Stratiienko said. “It's just all the time because all the news, all the stuff that we follow, is just basically showing the pictures.”

“Basically, my country is in the war and I just don't know what to do with it. I don't have anything inside. I'm just so lost. I don't have motivation to do anything. There's nothing that matters for me more than just thinking about home.”

In 2018, Dehodiuk came to the United States as a highly ranked 19-year-old tennis player who’d competed throughout Europe and didn’t speak English well. He dreamed of playing professional tennis and being ranked No. 1 in Ukraine, a goal he achieved in the under-16 age group. UWA’s scholarship offer broadened his international reach and brought him to the United States.

The first U.S. city he saw was Birmingham. The second was Livingston, where Ukrainian-speaking students are exceedingly rare. Though he now speaks English with confidence, he doesn’t minimize the comfort that comes from having a Russian-speaking Ukrainian close to his age on the Tigers’ coaching staff.

They are far from home, safe from the war, but together.

“I don't know how I would feel without having someone with my mentality from my country that I could talk to and share my thoughts,” Dehodiuk said, “because it helps to talk to people. I have talked to many people here, and not only about the war, just in general. But having someone speaking your language is different.”

Fight in Ukraine or remain at UWA

Anticipating the Russian invasion, Ukraine in February began preventing men aged 18 to 60 from fleeing. Had their tennis skills not brought them to UWA, Stratiienko and Dehodiuk might today be serving in the military. For them, it’s a game of what-ifs: what if they’d remained in Ukraine, what if they were mobilized into the army, what if they returned home to fight.

They’ve thought of those things. Stratiienko admits to having “some ideas” about joining the defense, but his father dissuaded him, parental advice from a modern warzone. “After talking to him and stuff like this, he just said, ‘Don't even try it, there are enough people already and we'll make it happen.’”

Stratiienko shrugs. He hasn’t seen his family for three years.

“It's pretty hard … because you cannot help with anything you do here,” he said. “You cannot provide any kind of help. So it's a little bit putting you down, but there’s nothing you can do. The only thing you can do is basically fly to Poland and get a weapon and go there.”

Dehodiuk’s mind has wondered there, too. He remembers watching a video online in the early days of the war. Two men, father and son, driving in a Ukrainian town. Then, noise. Russian troops shot at the car. On his phone, he watched the son crying as the father passed away. “At that point, I was like, I can't watch anymore,” he said.

He debated if he was in the right place.

“That's when I was like, I should probably go home and just fight for my country, fight for freedom, because all my friends basically now are doing that,” he said. “And how are they going to look at me when I go home?

“They're going to tell me, ‘Oh, yeah. So you were waiting all the time in America, but then when the war ended, you came back home.’ I don't really want this thing to happen, but I promised my mom. And my mom told me, ‘Don't come back.’ She doesn’t want me to go there. She wants me to stay safe.”

Before the war, Stratiienko and Dehodiuk each knew what they wanted to do -- remain in the United States, earn their degrees and work in tennis. The war hasn’t thwarted those plans as much as it has potentially altered them. After graduation, Dehodiuk plans to enroll in graduate school at UWA and pursue his master’s degree. His wants to coach. Stratiienko wonders if he can remain in the United States after graduation because “right now, basically, we kind of don’t have a home,” and it’s uncertain how Ukrainians’ citizenship and passport statuses will be affected should Russia overthrow the government in Kyiv.

He’s thought of seeking legal counsel to guide him through the process of seeking asylum or changing his citizenship. But it’s confusing, one of war’s innumerable byproducts. “I would love to stay here. It's a lot of opportunity,” he said. “But for right now, I would love to have the paperwork where I could freely just stay and live inside the country.”