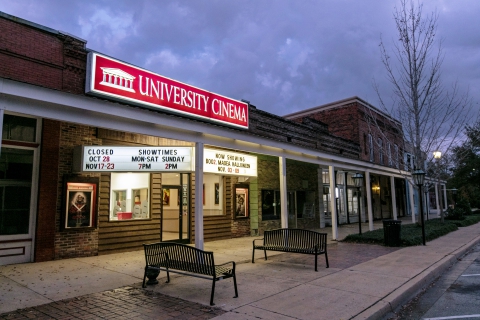 University Cinema in downtown Livingston before closing due to the pandemic.

For two years, University Cinema in downtown Livingston existed not as a movie theater, but as a time capsule for life immediately before the Covid-19 pandemic shuddered most of the world.

On March 15, 2020, student workers at the University of West Alabama-owned cinema welcomed movie-goers for that night’s film: “The Call of the Wild,” starring Harrison Ford. They sold tickets. They hawked popcorn and drinks. Before leaving, they cleaned the concession stand, swept the floors and readied for the next evening’s show.

UWA’s cinema, though, has been dark ever since. Jason Gardner, the university’s director of student activities, is eager to again welcome patrons to the 90-seat theater -- and he will this spring, once a motherboard for the computer-operated projector arrives from Belgium and he hires students to run the place.

But how the two-year shutdown happened is a script-worthy tale itself.

Gardner occasionally walked through the cinema during the pandemic. “It was creepy,” he said. The clock was essentially frozen. Dust, like spring pollen, covered everything. Old movie posters decorated the wall: “Trolls 2: World Tour,” “Antebellum,” “I Still Believe,” “Peter Rabbit 2: The Runaway,” and “F9: The Fast Saga.” Items employees innocently left behind -- drinks, for instance -- remained in place.

Outside, the overhead marquee still read “CLOSED UNTIL FURTHER NOTICE.” On either side of the front entrance remained two poster displays. One featured a “Trolls 2” print. The other was empty.

“The first time I came in here, I walked out,” said Gardner, who oversees the student employees and serves as the cinema’s booking agent. “I was like, everything is the same.”

Growing concern for slowing community spread of the coronavirus and mandated guidelines under Gov. Kay Ivey’s “Safer at Home Order” upended most public activities in Alabama that spring and summer. Along with temporarily closing the cinema and halting on-campus events, UWA transitioned to online-only classes, faculty and staff began working from home, and many students living in university housing left campus.

“It was a crazy time,” Gardner said.

That peculiarity makes the re-opening of University Cinema all the more important for UWA students and the residents who frequent it. Spring not only is bringing warmer weather and outdoor activities, it’s ushering in a semblance of normalcy from the heights of the pandemic.

Though the cinema is UWA-owned, UWA-operated and staffed by UWA students, it is a public theater open to anyone, which stokes Gardner’s pride. It’s not unusual, he said, for patrons or church groups in Alabama’s Black Belt to drive 45 minutes or more to Livingston for a movie.

“We’re hoping they want the experience,” Gardner said. “That's what we want to deliver here, a good experience in a small town.”

In that vein, the cinema is as much a community outreach as it is a student activity, he said. But its importance to the student experience at UWA -- a public university in a rural Alabama county -- shouldn’t be discounted, either.

When the opportunity arose more than a decade ago to buy the cinema, “We started looking at it from the university aspect,” Gardner said. “So to be able to recruit kids to come here and retain kids here, we've got to help be a part of town and try to deliver experiences. So it's a very different aspect.”

Readying University Cinema for its re-opening has re quired more elbow grease than technical support. Other than repairing the computerized projector, the main chore has been deep-cleaning everything: the concession stand, the lobby, the bathrooms and the theater itself. Gardner said he’s spent hours surveying the facility, literally putting his hand on items in search of those needing repairing or replacing.

Because the cinema is university-owned and doesn’t operate as part of a national theater chain, Gardner often doesn’t know which movie he will show until the Monday of each week. National premiers require longer weekly stays and take larger financial percentages from the theaters, which limits University Cinema’s profit and the variety of movies shown each month.

The goal, Gardner said, is to show a different film each week instead of a national premier for two or three consecutive weeks. When the cinema reopens, show times will remain 7 p.m. Monday-Saturday and 2:30 p.m. on Sunday. UWA students can get in free once a week.

“We have everything to deliver you the experience you're going to get anywhere else, and that's our goal,” Gardner said. “If you go back and look at our social media, people are talking about us on there, ‘I love that little theater. They treat me well.’ We want to give a Chick-fil-A experience or Disney experience in Livingston at a movie.”