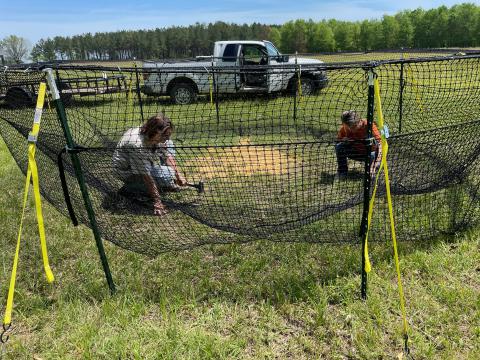 Photo: PAIS Technician Drew Busby and student intern Raven Clagg construct and set a trap to catch feral hogs as part of the Partners Against Invasive Species (PAIS) program that launched in 2018

The University of West Alabama leads a partnership that has just been awarded $744k by USDA for an agricultural innovation and sustainability project benefitting east Mississippi and west Alabama. The project is funded by USDA on the successful heels of a preceding project similar in scope.

Funded by the United States Department of Agriculture’s National Institute of Food & Agriculture (USDA, NIFA), this is one of only two in the nation funded at this dollar level, and only 11 total funded.

Dubbed PAIS 2.0, Partners for Agricultural Innovation and Sustainability is a collaborative effort between UWA, East Mississippi Community College (EMCC), Coastal Alabama Community College (CACC), and the Sumter County Soil and Water Conservation District (SCSWC). UWA leads the project and was eligible to apply through its designation as a certified non-land grant college of agriculture (NLGCA).

Through PAIS 2.0, researchers intend to provide valuable information to farmers, ranchers, and foresters that will assist those industries in developing plans for adapting and thriving.

“Agriculture in the southeastern United States faces many challenges in the coming decades,” explained Dr. John McCall, dean of the college of natural sciences and mathematics at UWA. “The ability of these industries to compete in a harsh economic environment is made increasingly difficult by invasive species, soil degradation, unpredictable climates, and other issues. We want this project to benefit our regional producers and provide the outreach and assistance they need through a multi-pronged approach.”

PAIS 2.0 will lead to development of a database of stakeholders, by which an outreach program can be developed to address the information gaps that exist, then provide hands-on assistance from trained student interns. By gaining this experience, students’ career opportunities are enhanced, and the industries of agriculture and conservation gain skilled professionals. All these goals, according to coordinators, will lead to continued development of the West Alabama Center for Agriculture and Biodiversity.

“PAIS 2.0 will stimulate interaction between struggling agricultural producers in the region and the institutions prepared to assist them,” McCall said. “In this way, it will provide a competitive advantage to stakeholders, spur economic growth, and stabilize communities in the area.”

The project will focus on four issues negatively affecting production in the region, including invasive species, pollinator support, forest management, and soil health.

The initial three-year PAIS project, Partners Against Invasive Species, launched in 2018, assisted more than 250 landowners in west Alabama in the fight against two of the region’s most invasive species, feral hogs and cogongrass. The project provided internships for more than 15 students who have gained experiential training in invasive species management.

Through PAIS, UWA student interns assisted in the safe application of herbicide to more than 100 acres of land from 100 different landowners. In coordination with Sumter County Soil & Water Conservation District, student interns partnered with more than 50 landowners in removing nearly 1,300 feral hogs across 900 square miles in Alabama.