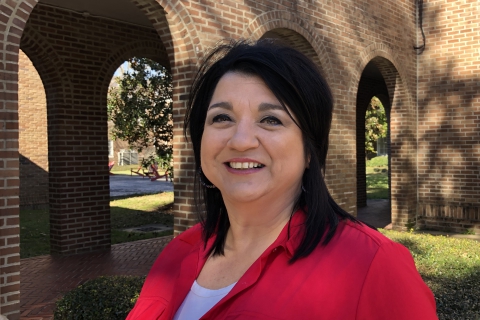 Dr. Jodie Winship has taught at UWA for 13 years.

It’s the underdogs, Dr. Jodie Winship says, who tug at her heart, the unpopular, the excluded, the downtrodden, the people whose circumstances often separate them from the rest. Her explanation is quite organic. “We were poor growing up and didn’t have a lot,” she says, “so I was always for that kid who didn’t have it.”

One kid in particular.

Years before she joined the Julia Tutwiler College of Education faculty at the University of West Alabama, a teenaged Winship agreed one summer to help care for Casey, the daughter of her school’s special-education director. Casey had Down syndrome.

Winship, though inexperienced with special-needs children, didn’t flinch. She babysat Casey. She took Casey to speech-language pathology sessions. Over time, her interest in Casey’s development grew, the germinating seeds of a future educator’s career. “And I just fell in love with working with her,” Winship says.

That snippet isn’t the reason why Winship became a teacher; it is, she admits, “a long story.” But it does illustrate the New Orleans native’s empathy for special-needs children and commitment to educating students who share a similar passion.

“That had always been an interest to me. Even when kids were excluded in school, I would take up for them. I was always in their corner,” says Winship, who recently returned to teaching full-time after an eight-year stint as chair of the Teaching and Learning and Instructional Leadership and Support departments at UWA. “Through college, through my undergraduate years in education, it was the first thing that came easy to me. It was so natural. It was like, ‘OK, this is what I should be doing with my life.’”

Ask Winship why she enrolled at Mississippi State University and she chuckles. “I followed that boy,” she says -- meaning her high-school sweetheart and future husband, Craig Winship. Ask how she fared as a college freshman and she turns blunt. “I had no business going to a senior college, but I did anyway,” she says. “And I didn’t do well the first semester because it was such an adjustment leaving my brother and sister, because I felt they needed me, which they did.” Time, though, soothed the adjustment. Her grades and attitudes brightened. She made MSU’s honor roll. And the affirmation became obvious.

Thirteen years ago, Winship arrived in Livingston with experience sprinkled with dollops of diversity: she had taught special-education students; worked for Mississippi Protection and Advocacy, a nonprofit that guards the rights of people with disabilities; and taught education students at Mississippi State’s Meridian campus. It wasn’t by accident, either. From the get-go, her plan hinged on dipping her toes in as many facets of special-education and disability advocacy as she could manage.

Winship often tells people that she agreed to drive the “extra 17 miles” to work in Livingston because one of her daughters, then a student at UAB, would be eligible for in-state tuition. But she offers a quick addendum: “I tell them I came here not planning to stay (long), and now I don't plan on leaving. I just fell in love with the university, the population of the students we serve, and the family atmosphere.”

Again, her kinship with the underdog -- in this case, UWA’s population of first-generation college students and enrollees from Alabama’s Black Belt region -- rises in the conversation, a theme always present.

“I show them that you can create expectations for your children to be achievers -- not necessarily to go to college, but to have achievements and accomplish things in your lives.”

Today, Winship laughs when describing the difference between serving as an administrator and teaching a full load of classes without the added demands. This semester, she’s teaching two special-education courses and the college’s education law course.

“It’s very refreshing to me, it’s a lot less stress. I feel a lot better,” she says. “I went from having like 200 emails a day to having like five or six. It’s amazing; life’s great.”

Becoming a professor, after all, was the goal Winship adopted when she embraced education as a profession. She enjoyed teaching and adored learning. But she knew career dissatisfaction would linger if she didn’t earn her doctoral degree and become a professor -- not for ego’s sake, she says, but for the larger impact she could have on others.

“There was just something about those professors that I had so much admiration for,” she says. “They sparked my love of learning, because I didn’t have that before I went to college. That’s something I wanted to do for people, because that’s what was done for me. And I knew that the most effective professors weren’t just professors, they were also teachers.”

It’s no surprise, then, when Winship lists the vital traits special-education teachers must have.

“You have to have people who genuinely want kids to succeed. And they have to have a certain level of patience, because sometimes it takes a while to get that progress.”