The album's cover features a UWA cap and face mask.

With artwork loosely based on one of rock music’s iconic images and a track listing of studio and live recordings, the University of West Alabama Choral Union’s recently released album may exemplify one trait more than all others: perseverance.

On that, UWA lecturer Mark Turner, who produced the album, has no doubt.

“It was both fun and exhilarating -- and very stressful -- all the time,” he said. “It was a constant combination of extreme emotions throughout the entire project.”

“Stronger Together,” released this month, is a 12-song collection performed by UWA students. Seven songs are studio recordings. Five others were culled from the choir’s archive of live performances. But what still takes Turner’s breath away -- besides the students’ performances -- is that the album was conceived during a pandemic, recorded amid Covid-19 health restrictions, and produced in a campus studio that two years ago did not exist.

The album, with a digital-only distribution, debuted on YouTube this month. Its Spotify release is expected soon.

“I don’t think we’ll ever do another one like this ever again,” said Turner, the assistant choral director at UWA. “This one is a one-off in a lot of ways, because we had to do a lot of things in ways that are completely backwards from how you would want to do it.”

And yet, it worked.

Quirky as it is, the album’s genesis formed when the university’s music faculty returned to campus following the pandemic-caused lockdown. That’s when reality set in, Turner explained. Face masks were required on campus. In-person concerts were forbidden. Nothing, he recalls, was normal. “So we just had a year to twiddle our thumbs, or to do something,” he said.

Thumb-twiddling offered scant appeal, and a faculty-meeting suggestion came Turner’s way: in lieu of live shows, could he and the choir record an album?

“Yeah, we can do it,” Turner answered. “It is going to be difficult, but it’s doable.”

But where? UWA’s music department didn’t own a recording studio, and without one the notion of embarking on a full-length studio album project was foolish. Undeterred if not a bit stubborn, Turner enlisted the help of Brandon Walker, an instructor of digital communications at UWA whose professional background includes producing, editing and engineering. “He’s got some of the best ears (for music and sound) I’ve ever encountered,” Turner said.

Their confabs revealed advice on how to turn the Pruitt Hall choir room into a workable, professional-level recording space, or at least to come close to that. “It isn’t a terrible room sound-wise, but it’s not great,” said Turner, who welcomed Walker’s suggestions for improving the space’s acoustics.

Carpets and blankets, some requisitioned from home, were nailed to walls and strewn across floors to soften the harsh reverb. Because of campus social-distancing requirements, microphones couldn’t be placed close together so that singers -- who were masked, per university rules -- could hear each other easily. Trial and error became the norm. Yet, “we ended up creating a pretty usable acoustic environment,” Turner said. “The problem is, you’d never record a choir this way -- ever.”

For equipment, Turner used the studio board the university’s theater department gave its music-department colleagues a few years ago. Because it hadn’t been used on such a grand project, a month elapsed before Turner tweaked it to his liking. Choir singers need studio headphones so they can hear musical cues and keep microphones free from audio clutter, but for the early sessions Turner didn’t have enough for everyone.

“If (listeners) think my strings are real,” he said, “that’s the best compliment that anyone can give me for this project.”

“We did this for the university. The vibe became what we didn't know at the beginning, that the university was hurting and we were all just down and the year was fraught with difficulties and challenges."

Sonically, “Stronger Together” is less a collection of songs around a singular theme and more of a feel-good vibe designed to uplift the listener and its performers, Turner said. When selecting songs, the overarching goal was to consider the moment -- recorded over a 16-month period, during a pandemic -- and create joy, whatever it took. Turner and Dr. Christopher Shelt, UWA’s choral director, selected the material.

“This is just unprecedented in the history of any of our lives,” Turner said. “Everybody was coming back for the first time, (the students) were all worn out and apprehensive, and restrictions just made life totally weird. Whether you liked it or not, it was just strange. Everything was different.”

By and large, songs were selected because of Turner’s desire to “pick material that our students are going to have a great time working on.” Unlike live recordings, studio albums are marathons of repetition in which songs are deconstructed into singular parts, each performed ad nauseum in search of perfection, or a facsimile of it. Turner used a few “industry trade secrets” to supersize the sound, including triple-tracking vocals.

Even the album’s artwork features a pandemic theme -- a UWA baseball cap paired with a UWA face mask, an ode to signs seen across campus when students returned. Instead of a group photograph of the choir, Turner wanted something “simple but iconic” that looked like the cover of “The Dark Side of the Moon,” the 1973 Pink Floyd album instantly recognized for its prism-and-rainbow imagery.

“I think the end result of the album cover is a really great image for the project,” Turner said.

Though “Stronger Together” is a digital-only project, its artwork will be featured on card-sized handouts that will include the album cover on one side. The flip side will include the track listing, performer credits and QR codes for the YouTube and Spotify links.

“We did this for the university,” Turner said. “The vibe became what we didn't know at the beginning, that the university was hurting and we were all just down and the year was fraught with difficulties and challenges. If you listen to this album, it encompasses what we all needed to hear and feel at that time. It’s got something for everybody.” 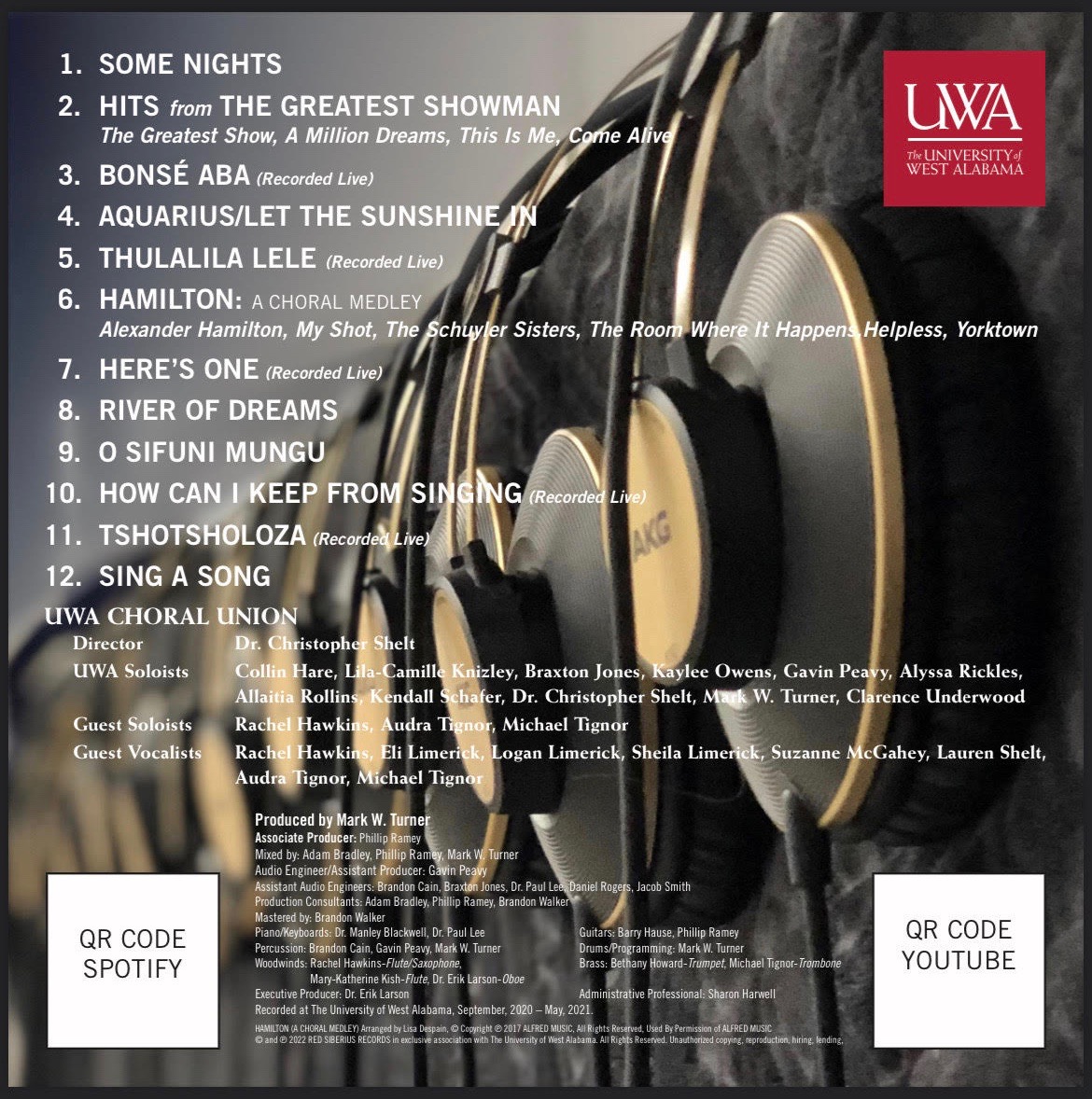