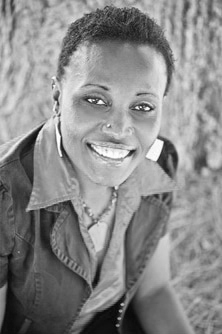 Esther Ngumbi, Ph.D., was born in a rural farming community along the Kenyan Coast. Education for girls was considered unimportant and there were no societal role models to inspire girls to reach for the stars. Her parents were teachers, struggled, and sacrificed to raise enough money to pay for their children’s school fees.

Her parents would collect their paychecks, but eat nothing before coming back in the evening, hungry and tired. She wondered at their ability to be in town, in the midst of all the best foods, with money to purchase that food, but choose not to spend it on themselves so that Esther and her siblings could go to school. This had a powerful effect on her and inspired her to pursue her academic career goals and persevere against challenges however daunting they seemed.

She studied hard so that one day she could rescue her family and community from poverty and be a role model to many young African girls in similar situations. She went through high school and eventually college and attained a Bachelor and Masters of Science at Kenyatta University. On a beautiful summer day of August 6, 2011, she attained what at times seemed to be an elusive dream: a doctorate degree in Entomology from Auburn University. She became the first woman in her community to obtain a Ph.D. degree.

She cried on her graduation day as she thought of her community in Kenya and the many girls in in her community who had the potential to be a scientist too, but simply lacked the opportunity. It was during that day that she told herself that she would do whatever needed to give girls more opportunities to break the poverty barrier, obtain an education and achieve greatness.

She has dedicated all of her passion, efforts, heart, and resources to bringing sustainable change in her community and she has become a role model for girls in her community.